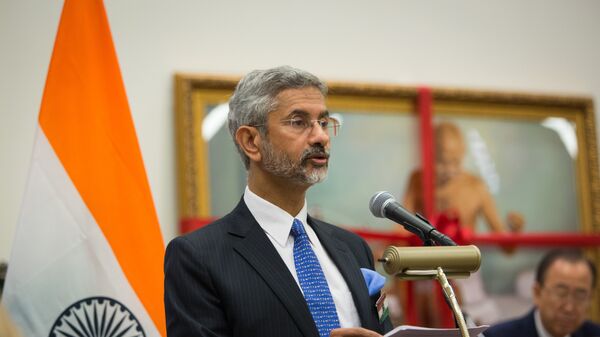 NEW DELHI (Sputnik) — India's top foreign official underscored the threat emanating from nuclear weapons falling into the hands of terrorists and a concerted global response in his keynote address at Implementation and Assessment Group Meeting of Global Initiative to Combat Nuclear Terrorism. He cautioned the states that the negative fallout of atomic power cannot be ignored, especially in nuclear-armed states which use terrorism as a national strategy.

"Events that have unfolded around us, more so in the past couple of decades, have highlighted that terrorism remains the most pervasive and serious challenge to international security. If access to nuclear technology changes state behavior, it is only to be expected that it would also impact on non-state calculations. Nuclear security, therefore, will be a continuing concern, especially as terrorist groups and non-state actors strike deeper roots and explore different avenues to spread terror. Developing a comprehensive global response is the highest priority," S. Jaishankar, secretary stated.

Jaishankar also spoke about the horrors of atomic power destruction and hoped that countries with nuclear weapons will act responsible.

"The power of the atom is wondrous and it has benefited mankind in various ways. The scientific community has also played a vital role in harnessing the nuclear energy but the negative consequences of atomic power cannot be ignored. World has witnessed immense destructive power of the atom," he said.

Jaishankar further said that comprehensive convention on international terrorism was proposed by India in 1996 which should be adopted soon.

The meet is being attended by delegates from over 100 countries including the US, Russia, the UK, France and Pakistan. Also, it is the first time the region is having such a high-profile meet and comes at a time when India is trying for a membership in Nuclear Suppliers Group (NSG).