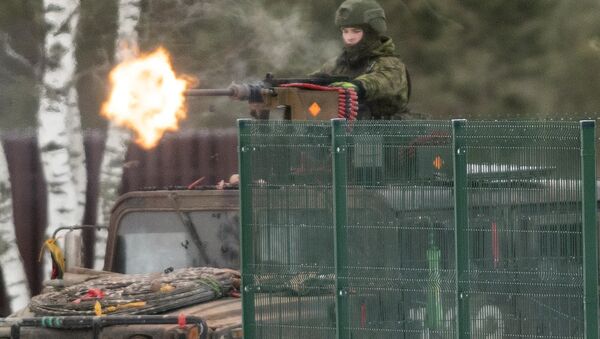 Moscow's ability to respond militarily to a possible escalation in Europe because of the United States' missile defense deployment would not spell the return to an arms race, the Russian Foreign Ministry told Sputnik.

MOSCOW (Sputnik) — Earlier, Russian envoy to NATO Alexander Grushko said that NATO needs to continue circulating the "Russian threat" myth as an ideological justification of its efforts to expand toward Russian borders and to strengthen its military contingent on its "eastern flank."

"Naturally, we will find a way to respond to adverse developments for us, and the reaction may be twofold," head of the ministry's Department for Nonproliferation and Arms Control Mikhail Ulyanov said Wednesday, pointing to diplomatic and military-technical responses.

Despite expressing skepticism toward forecasts that Russia and the United States are "doomed" toward a new arms race in Europe because of US missile defense, Uliyanov noted that the Russian military is actively at work on developing a military response.

"There is progress, too. But this will not necessarily spill into an arms race," the Russian diplomat pointed out.

He further argued that Moscow's Western partners "are unable to persuasively justify the need for missile defense."

"We perceive references to Iran only as a pretext. It is indicative that reaching the agreement on the settlement of the situation surrounding the Iranian nuclear program has changed nothing in terms of global missile defense," Ulyanov said, referring to the 2015 deal curbing Tehran's nuclear program.