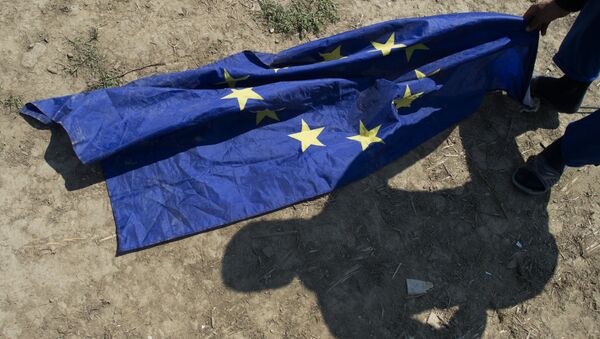 © AFP 2021 / Tobias Schwartz
Subscribe
The EU remains one of the most unique supra-national organizations. In the beginning of the 21st century the union is faced with a serious existential dilemma. Although Brexit is unlikely to ruin the bloc's pillars it seems it requires more than just economic reforms to breathe a new life into the EU.

While US President Donald Trump has thrown the future of the EU into doubt, on the other side of the Atlantic Ocean experts argue that all is not lost.

"I believe others will leave [the EU]. I do think keeping it together is not gonna be as easy as a lot of people think," Trump told The Sunday Times in mid-January, commenting on Brexit.

"The past year has been full of watershed developments," Sergei Guriev, Chief Economist at the European Bank for Reconstruction and Development (EBRD), writes in his op-ed for Project Syndicate, "Aside from Donald Trump's victory in the United States' presidential election, some of the European Union's weaknesses were fully revealed, with the United Kingdom's vote to leave casting the bloc in a particularly harsh light."

"But Brexit does not have to spell the Union's demise. Instead, it can serve as a wake-up call, spurring action to address the EU's problems," the economist insists.

Brexit to Hurt Both Sides, EU Willing to Pursue ‘Hard Divorce’ Scenario - Envoy
According to Guriev, Europe's integration is far from being complete. A number of measures such as the creation of a European banking union or the implementation of a joint unemployment-insurance scheme could add to the process, he assumed.

To break down political and social resistance to reforms Brussels needs to make them more appealing and suitable for each member state, the economist believes.

"Packaging reforms to make them more palatable may sound like Business 101. But this is not just about quotidian deal-making. Rather, it is about completing — and thus protecting — the EU, by building a more sustainable set of institutions," Guriev noted, adding that if the EU "is to remain a beacon of openness and liberal democracy," its leaders need to ensure that "all members benefit equally along the way."

Although Guriev's proposals look reasonable, it seems that they are too little, too late.

Eurosceptics Winning Elections to Have 'Devastating' Impact on EU Institutions
In his recent interview with RT Fyodor Lukyanov, editor-in-chief of Russia in Global Politics journal, highlighted that the bloc's previous integrationist model "is no longer working."

The expert explained that after the collapse of the USSR the European Union attained a peak in its development but failed to work out a new system of relations with the bloc.

The crux of the matter is that since those times the bloc has been developing pretty chaotically while taking efforts to adapt its new members to European standards.

"The previous integrationist model is no longer working," Lukyanov said, "The EU's demise would spell a disaster and [Brussels] needs to work out new principles to stay alive." 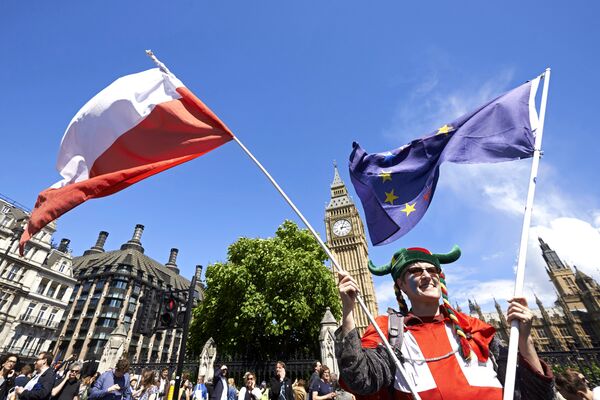 A woman holds up a Polish and European flags in Parliament Square as thousands of protesters take part in a March for Europe, through the centre of London on July 2, 2016, to protest against Britain's vote to leave the EU.
© AFP 2021 / Niklas Halle'n

For his part, Dr. Lüder Gerken the President of the Centre for European Policy think tank noted in his December op-ed for Die Zeit that the number of Euroskeptics within the union is growing.

"The EU must admit the fact that in recent years it has not been able to achieve much neither in terms of developing a common foreign and security strategy, nor in establishing the rules of an economic and stability pact, constantly having to face the domination of individual interests of the member states," Dr. Gerken stressed dubbing Trump's rise as yet another serious challenge to the EU's unity.

Apparently, the problem is that while being a supra-national organization the bloc consists of sovereign states with their own interests, aspirations and national strategies.

"The case of the European Union is a special one. It is not a nation state but at the same time it is not a conventional international organization. It is a unique invention, which is buttressed by two pillars of inter-governance and supra-nationalism," Alexey Gromyko, Director of the Institute of Europe of the Russian Academy of Sciences, writes in his recent report.

While some European leaders, according to Guriev, believe that without the UK it would be easier for the bloc to advance integration, Gromyko emphasizes that even after the much discussed Brexit the EU will remain too diverse to work out a single strategy.

"The EU even after tentative Brexit is going to stay too diverse and polycentric to generate a strategy, which in its consistency and cohesiveness resembles a strategy of a major nation state," Gromyko noted.

The Russian academic recalled that in the 1990s it was largely believed that nation-states would go into oblivion giving way to supra-national organizations. "However, the course of events in the beginning of the 21st century demonstrated that the news about the death of nation states were premature," he remarked.

In light of this the question arises whether the EU will manage to reconsider its integration practices, overcome its structural problems and work out a new system of relations within the union. It appears that it requires more than just "well-packaged" economic reforms to solve the bloc's existential dilemma.

000000
Popular comments
The EU is a dictatorship, not a democracy. I hope this clarifies the confusion the writer of this article has in determining what the EU is. The EU is not composed of elected officials period and part of "good ole boy" scheme to promote and perpetuate themselves for personal gain. The EU dictators live in a cocoon and out of touch with the reality outside of that cocoon that will bring them down. The sooner the EU collapses the better.
Tim - USA
9 February 2017, 03:52 GMT
000000
"constantly having to face the domination of individual interests of the member states," or rather, governments. What a surprise, aye?!