The Bloc That Failed. Why is the EU So Ineffective? 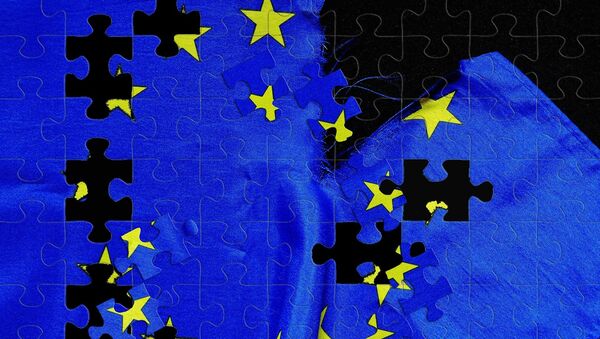 Twenty-five years after its inception in 1992, the European Union is facing a plethora of economic, defense and security problems. The integration processes going on ever since have laid bare deep-seated political differences between members of the 28-nation bloc.

The idea of a single Europe was originally meant to put the war-scarred European economies back on track through desperately needed investments, economic integration and industrial cooperation.

Support for EU Plummeting Regardless of How Frenchmen Vote
In 1957 France, West Germany, Italy, Belgium, Luxembourg and the Netherlands established the European Economic Community (EEC) lifting customs barriers and integrating their economies.

However, the 2004 inclusion of the economically lagging Poland, Slovakia, Slovenia, the Czech Republic, Latvia, Lithuania, Estonia, Cyprus and Malta and of Bulgaria and  Romania in 2007 turned the EU into a supranational alliance where Eastern European members served as a source of natural resources and cheap labor for their more prosperous Western “partners.”

Many experts explain this “integrationist fever” by Brussel’s desire to create a European super-state. Such ambitions by the advanced European countries, above all Germany, eventually backfired though.

Hit hard by the 2008—2009 financial crisis in the US, the debt-strapped Western European countries were faced with a financial meltdown in Greece.

According to the 1992 Maastricht Treaty undertaken to integrate Europe, the  gross government debt of an EU member country must not exceed 60%, but even the EU powerhouses, Germany and France, fail to meet this criterion (70% and 100% respectively) while Greek debt amounts to a whopping 170% of GDP.

The EU's Schengen visa-free travel zone is now in trouble amid an unprecedented migrant crisis and the growing threat of terrorism.

In 2015 the United Europe failed to stem the rising tide of migrants from North Africa and the Middle East and keep an eye on the more radically minded “arrivals.”

Moreover the past decade has seen a serious crisis of the EU’s multiculturalist policy and a painful search for an alternative one that would be in line with democratic values and respect for human rights.

The secular-Christian civilization has failed to socially adapt the descendants of North African and Asian migrants who settled in Europe in the late-1960s and during the 1970s and who refuse to live by the laws of their new country of residence.

EU 'Facing Existential Problems, Unable to Counterbalance Trump's Policy'
The enlargement of the Schengen zone and the lifting of border controls have allowed armed terrorists to avoid punishment by freely moving from one EU country to another. Brussels never bothered to establish an EU-wide body to coordinate the work of  its members’ law enforcement agencies.

Despite its powerful defense-industrial complex, the European Union is not ready to establish a pan-European army, preferring instead to rely on US protection, which encompasses all NATO member-states.

Britain’s decision to leave the EU came as a symbolic and logical result of the EU’s integrationist policy of the past 25 years.

In an interview with RT, Fyodor Lukyanov, editor-in-chief of Russia in Global Politics journal, said that even though Brussels was still able to meet the challenges of the past few years, it has been developing pretty chaotically since the inclusion of new members as it tries to adapt them to European standards.

“The previous integrationist model is no longer working. The EU’s demise would spell a disaster and [Brussels] needs to work out new principles to stay alive,” Lukyanov said.

He added that Germany could help save the EU, but Berlin was not offering any concrete recipes, at least for now. Lukyanov did not rule out the possibility of one or several EU members breaking away, but added that centrifugal forces within the bloc remained insignificant.

“Even if [National Front presidential hopeful] Marine Le Pen wins, this would hardly mean the end of the European Union as such,” Fyodor Lukyanov concluded.

The European Union has been struggling to manage a massive refugee crisis, which escalated in 2015 with hundreds of thousands of people form the Middle East and North Africa seeking asylum in the EU member states.

Europe to Face New Wave of Migrant Crisis Next Spring – Maltese PM
The EU border agency Frontex detected over 1.83 million illegal border crossings in 2015, in contrast to some 283,000 in 2014.

Maltese Prime Minister Joseph Muscat has warned that the European Union will face another wave of migrants coming from Africa across the Mediterranean next spring, unless agreements like the deal with Turkey are made with the countries of northern Africa.