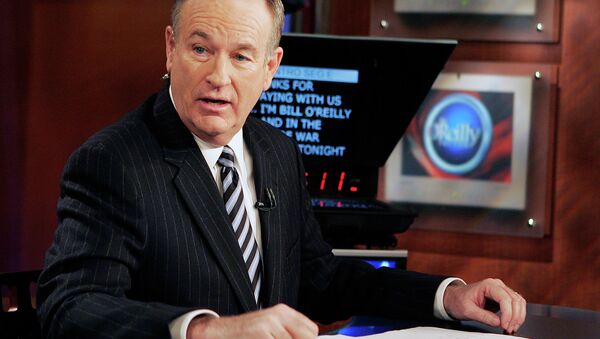 Fox News Host Offers No Apology for Remarks About Putin, Says Check Back in 2023
This past weekend US President Donald Trump gave an interview to Fox News host Bill O’Reilly. O'Reilly, among other things, called Putin a "killer," to which the US leader responded: "You think our country’s so innocent?"

The remark about the Russian leader was later addressed by Russian presidential spokesman Dmitry Peskov, who said that the "words on the part of the Fox News reporter are unacceptable, offensive. To be honest, of course, we would prefer to get apologies addressed to the [Russian] president from such a respected broadcaster."

This however provoked a theatrical reaction from O’Reilly who refused to apologize, claiming that he might have something ready in roughly six years.

Commenting on the remarks of the US host, Russian political analyst and expert in American studies, Mikhail Sinelnikov-Orishak, told Radio Sputnik that such boorishness has long become a characteristic feature of today's American journalism.

"It might be a new trend in journalism, however it's one which is going downhill," he said.

"It is just boorishness. Unfortunately, such boorishness and impudence have become typical of American journalism. It is a habit similar to the one of putting your feet on a table. One might like it or not, but it is a given reality," he explained.

Trump Responds to Fox News Criticism of Russia, Saying US Not 'So Innocent'
"However you have to answer for your words. If you call someone a 'killer,' then you better be ready to back it up with evidence," he added.
The political analyst further noted that the position of Fox News is by no means balanced or objective.

It is the same very channel, he said, which had been showing Moscow in winter with palms in the streets. It was further revealed that they confused Moscow with Athens, broadcasting the protests from Greece as those in Moscow's streets, which resulted in a massive backlash.

It is the same very channel which shamelessly cut off a girl speaking live on air about the actions of Georgia during its 2008 conflict with South Ossetia, when the channel had already taken Georgia's side.

However, the channel claims that it presents a balanced position, which  is far from the truth, he finally stated.

Kremlin Expects Apologies After Fox News Journalist Calls Putin a 'Killer'
Sinelnikov-Orishak also commented on the response of President Trump, who remarked that Washington is not so "innocent," calling it "rather telling."

"It is an encouraging signal that Trump tries to deliver on his electoral promises. For example, when Barack Obama was campaigning, he promised to sign a law on the withdrawal of US troops from Iraq on his very first day in office. However it took him a year and a half," he reminded.

Trump though has started to do what he has promised right after he was sworn in. He promised to normalize relations with the Russian leader. And judging by his comments to the Fox News host, he made it clear that it was not just his electoral rhetoric.

Trump's answers were strong and somewhat unexpected. Not many leaders are capable of speaking like this, he finally stated.