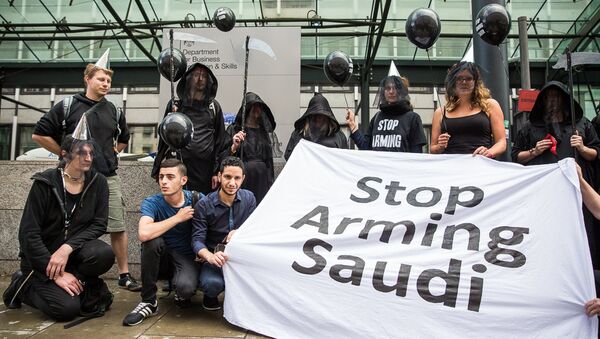 CC BY-SA 2.0 / Campaign Against Arms Trade / Human rights campaigners
Subscribe
International
India
Africa
Britain's sale of arms to Saudi Arabia is facing its greatest legal challenge to date, with the UK High Court hearing a judicial review against the exports as campaigners accuse London of being complicit in civilian deaths inflicted as part of Riyadh's military campaign in Yemen.

The legal challenge, opening on Tuesday (February 7) and spearheaded by the UK-based Campaign Against Arms Trade (CAAT), is calling for an immediate halt to arms sales to Saudi Arabia and a freeze on further contracts.

Outside the High Court ahead of today's Judicial Review of UK arms sales to Saudi Arabia https://t.co/qCT7at2rEl #StopArmingSaudi pic.twitter.com/J7R88fYzI6

​​CAAT argue that due to the extensive nature of Saudi airstrikes in Yemen, there is a risk that British-made weapons are being used in attacks on civilian targets, which campaigners say would be a violation of international law.

Today, in the High Court we challenge the government to #StopArmingSaudi https://t.co/qCT7at2rEl UK weapons being used in #Yemen pic.twitter.com/nqypzM14ND

The heavy civilian casualty rate in Yemen and catastrophic humanitarian situation in the country has led to severe scrutiny of UK arms exports to the Saudi government, however British officials have so far rejected calls to halt the sale of weapons to the Gulf kingdom, citing the country's arms export controls as effective legal safeguards.

Kate Hobbs, CAAT's local outreach coordinator, told Sputnik that despite the government's assurances over its export practices, it has a case to answer.

C —starting point is that MoD has not found any breach of IHL [in Yemen coalition attacks], but they don't even routinely address that issue

​"It's an incredibly short-signed policy from the UK, but the law around British arms export control is very clear — that arms exports shouldn't be authorized if there's a clear risk that they could be used in breach of international humanitarian law or international human rights law," Kate Hobbs told Sputnik.

"The claim that the High Court will be considering, that we've mounted, calls on the department of international trade to suspend all arms export licenses to Saudi Arabia and to stop issuing further arms export licenses for use in Yemen while it holds a review into the issue."

​"The UK export control law is very clear, and if they'd have adhered to the letter of the law, it looks like these licenses should never have been issued in the first place, and it's certainly true that if our High Court action is successful, then it will set an incredibly important precedent," she added.

The issue of arms sales to Middle Eastern countries has been a hot topic in the UK in recent years, particularly following investigations into the military actions and alleged human rights abuses of certain governments.

Britain has been widely criticized for selling $US4.1 billion (£3.3 billion) in military equipment to Riyadh since it became involved in the Yemen conflict in March 2015.

​The increasing human rights concerns has led to increased protests against the UK's arms policy in the region, which Hobbs believes will eventually force the government to change its approach to arms sales in the Middle East.

"We've seen successive UK governments — from Labour to the coalition and the Tories — consistently prioritizing arms sales above human rights concerns, and the UK has supported the Saudi-led bombing right from the start, but I don't think public feeling on this issue can be ignored forever," Ms. Hobbs said.

​"We've seen MPs from all the major political parties speaking out against arms sales to Saudi, as well as major human rights organizations, such as Oxfam and Amnesty. I mean even the UN has accused Saudi of 'widespread and systematic targeting of civilian infrastructure' in the airstrikes. So the government can't bury its head in the sand forever."