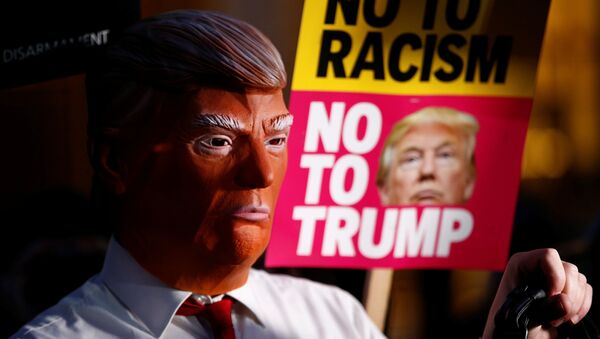 © REUTERS / Peter Nicholls
Subscribe
International
India
Africa
Donald Trump has sparked a political row in Britain, after the speaker of the House of Commons said it would be inappropriate for the US president to be allowed to address parliament - an honor granted to Nelson Mandela, Mikhail Gorbachev, Boris Yeltsin and several other senior statesmen.

Trump — who the British Government is wooing in support of Brexit and a new US-UK trade agreement — is due for a state visit to Britain later this year, which would normally include meeting Queen Elizabeth II and addressing parliament.

However, a group of MPs has called for Trump to be barred from the privilege over his outspoken comments on racism and sexism. In response to calls for him to take action, the Speaker of the House of Commons, John Bercow said: "An address by a foreign leader to both Houses of Parliament is not an automatic right; it is an earned honor."

​"However, as far as this place is concerned, I feel very strongly that our opposition to racism and to sexism, and our support for equality before the law and an independent judiciary are hugely important considerations in the House of Commons," Bercow said.

The last two accorded the privilege were Xi Jinping, President of China and Narendra Modi, Prime Minister of India — both of whose countries Britain is keen to drum up more trade with.

So Tory MPs want John Bercow to stand down as #Speaker for his entirely reasonable view about #Trump. That speaks volumes. #r4today #Bercow

@LeaveEUOfficial He speaks for Parliament, which is Sovereign. Have some bloody decorum.

Meanwhile, in Europe, the leader of the Socialists and Democrats in the European Parliament, Gianni Pittella said, during an EU summit in Malta:

"We send a clear message from Malta to president Trump. We will not tolerate you undermining EU values and threatening our democracies."