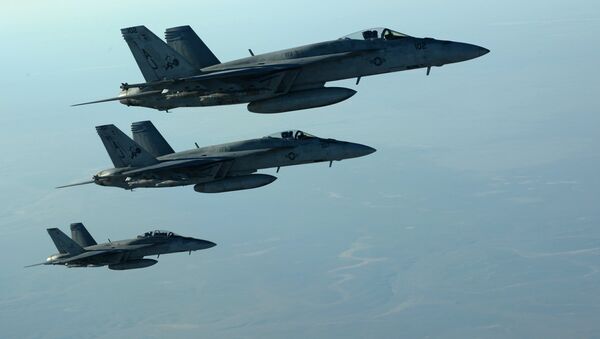 On Sunday, The Military Times newspaper revealed that the American military has failed to publicly report on thousands of lethal airstrikes conducted over several years in the Middle East. RIA Novosti political analyst Alexander Khrolenko provides his reasons why the US Defense Department keeps this data secret.

Strikes? What Strikes? Pentagon "Forgets" About 6,000 Airstrikes in Syria, Iraq
According to the newspaper, the American military has failed to publicly disclose potentially thousands of lethal airstrikes conducted over several years in the three countries of the Middle East, namely Iraq, Syria and Afghanistan.

The outlet discovered a serious divergence in data provided by an open-source database maintained by the US Air Force and the Defense Department’s public summary of operations published on its official website, which claims to use the Air Force airstrike data.

The most recent discrepancy noted by the newspaper is that Air Force summary counts 23,740 coalition airstrikes through 2016 in Iraq and Syria while the Defense Department's website lists 17,861 through January 31.

Hence, the outlet notes, Pentagon" fails to account for nearly 6,000 strikes dating to 2014, when the air campaign against Daesh (Islamic State/ISIS.ISIL) began."

As for Afghanistan, "in 2016 alone, US combat aircraft conducted at least 456 airstrikes in Afghanistan that were not recorded as part of an open-source database maintained by the US Air Force, information relied on by Congress, American allies, military analysts, academic researchers, the media and independent watchdog groups to assess each war's expense, manpower requirements and human toll."

"The enormous data gap raises serious doubts about transparency in reported progress against the Islamic State, al-Qaida and the Taliban, and calls into question the accuracy of other Defense Department disclosures documenting everything from costs to casualty counts," the newspaper says.

Dangerous Game: The World Sees 'Close Calls' With Pentagon in Middle East
"Most alarming is the prospect this data has been incomplete since the war on terrorism began in October 2001. If that is the case, it would fundamentally undermine confidence in much of what the Pentagon has disclosed about its prosecution of these wars, prompt critics to call into question whether the military sought to mislead the American public, and cast doubt on the competency with which other vital data collection is being performed and publicized. Those other key metrics include American combat casualties, taxpayer expense and the military’s overall progress in degrading enemy capabilities," it adds.

Commenting on the above revelation, RIA Novosti political analyst Alexander Khrolenko provides his reasons why the US Defense Department keeps this data secret.

"The secrecy, distortion or hiding of information have certain financial implications," reads his article for RIA Novosti.

The political analyst further points out at the observations of The Military Times.

"The Pentagon discloses its top-line expenditures for each of these ongoing military operations, but that data is not readily broken down by the number of sorties flown by specific US aircraft and the amount of munitions they deploy. Consider, though, that Apache helicopters can carry a variety of weapons, including Hellfire missiles with a per-unit cost of $99,600, according to figures maintained by AeroWeb, a defense marketing intelligence firm that closely tracks international defense acquisition," the newspaper says.

Key Reasons Behind CIA Head's Revelations That US Has Inflamed Middle East
"A single airstrike can be carried out by multiple aircraft on multiple targets, and use multiple bombs, missiles, rockets and machine gun rounds. It can include combat sorties with predefined targets and attacks carried out during the course of close air support operations," it explains.

Besides, airstrikes can be carried out by fighters and other jets, attack helicopters and drones, and they can include any combination of munitions.

"Citing policy, military officials in the US and in Baghdad refuse to identify the type of American warplanes that conduct individual airstrikes in Iraq and Syria, nor will they provide a breakdown of activity by individual service components," the newspaper says.

Thus, Khrolenko explains, in every combat operation there are millions of US dollars flying over the air.

"If the missiles are being used without any record, the local command might be tempted to sell a batch of the US ammunition of high demand to its Middle Eastern or African allies, to mutual benefit and without any excessive formalities," he says.

All the more so, he further notes, as US Africa Command is in control of many covert military operations against terrorism on the whole continent, including Libya and Somalia.

"The price lists are covert, the losses are not publicized," Khrolenko says.

Peace in Middle East Only Possible If Russia Plays Major Role – Foreign Minister
The political analyst also recalls the report of The Bureau of Investigative Journalism, a British watchdog organization, which has revealed that Pentagon had spent hundreds of US dollars on fake PR campaigns.

It cited as an example the revelation of Bell Pottinger, a London-based PR firm, which said it had been paid more than $500 million from American taxpayers to spearhead a top-secret propaganda campaign in Iraq.

Last October, Bell Pottinger revealed that it had created fake videos that appeared to be the work of al-Qaida and also created news stories that looked as though they were produced by Arab media outlets, and distributed them through Middle Eastern news networks.

The propaganda videos were personally approved by Gen. David Petraeus — then the commander of US-led coalition forces in Iraq. On some occasions, even the White House signed off on the propaganda materials.

To understand the scale of the US' information war in the Middle East, Khrolenko explains, one should keep in mind that there were up to 40 PR companies working in the region for the period from 2006 to 2008.

"Hence, Pentagon's "shadow economy" and "peculiar record of military sorties" (and ammunition used) have a practical meaning: they help to conceal all the undesirable information and spread the necessary misinformation," he says.

Meanwhile, the distorted data on civilian losses in the US military operations in the Middle East puts in question already illusive worthwhileness of its military interventions, he finally states.