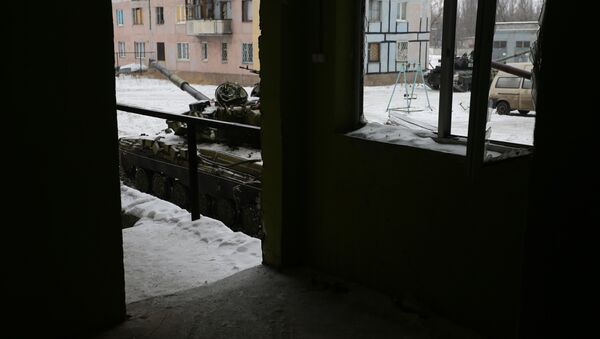 © AFP 2023 / Aleksey FILIPPOV
Subscribe
International
India
Africa
Russian envoy to Contact Group on Ukraine Boris Gryzlov stated that an agreement to withdraw heavy weaponry from the contact line in Donbass has not been implemented by Kiev.

Kiev Planned Donbass Conflict Escalation in Advance - Military-Diplomatic Source
MINSK (Sputnik) — Kiev has not honored an agreement to withdraw heavy weaponry from the contact line in Donbass and continues to resupply its forces in the region with weaponry and ammunition, Russian envoy to Contact Group on Ukraine Boris Gryzlov said Tuesday.

The Contact Group on Ukraine adopted a statement on February 1 calling on both sides of the Ukrainian conflict to withdraw heavy weaponry, banned under the Minsk peace accords, from the contact line in Donbas by February 5.

"This very important provision of the statement has not been implemented so far by the Ukrainian armed forces. From OSCE SMM reports and information received from territories adjacent to the contact line in Donbass, we know that the movement of heavy military equipment, as well as the resupply with weaponry and ammunition, continues in the zone controlled by Kiev forces," Gryzlov told reporters in Minsk.