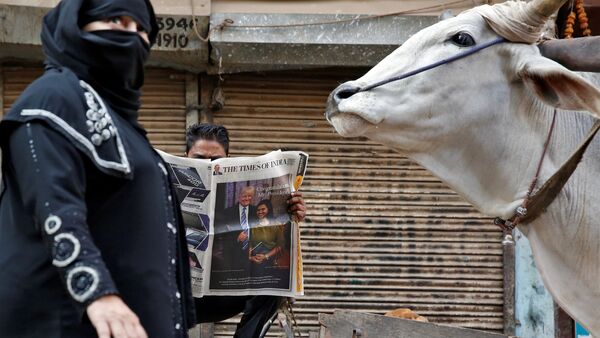 India Files Complaint to WTO Over US Visa Fees, Caps
New Delhi (Sputnik) — Undaunted by US President Donald Trump's strong advocacy and push for protectionism at home, India has complained against the US at the World Trade Organization (WTO) for alleged illegal subsidies and domestic content requirements for the renewable energy sector in at least eight US states. This has the potential to trigger a trade war and could have a spill-over effect on other areas too.

New Delhi has called for establishing a WTO dispute settlement panel to adjudicate over the subsidies and domestic content requirements worth tens of billions of dollars in Washington, California, Montana, Massachusetts, Connecticut, Michigan, Delaware and Minnesota. The request is expected to be considered on 20 February, according to sources.

India and the US failed to reach a negotiated agreement last November forcing New Delhi to push for the formal channel.

In its 11-page request, India has reportedly argued that the dispute with the US arose "from certain measures in the form of incentives which are granted and/or maintained contingent upon the use of domestic over imported goods in the renewable energy sector by various States of the US at sub-federal level." India has detailed these measures in its request and related violations.

New Delhi taking the dispute to the next level comes after a major embarrassment with the US over the Jawaharlal Nehru Solar Energy Mission that included incentives for domestically produced solar cells and modules. In 2016, the WTO's Appellate Body, the highest court for resolving trade disputes, struck down India's local content requirements for solar cells and modules.

No More US Chicken Legs: India Protests WTO Ruling to Lift Import Ban
Another area where a US-India face-off is in the offing pertains to the H1B visas, which is set for a major overhaul under the Donald Trump administration less than a month before he was inaugurated.

"India's interests and concerns have been conveyed both to the US administration and the US Congress at senior levels," said Vikas Swarup, external affairs ministry spokesperson.

New Delhi can raise a request for establishing a dispute settlement panel against the US over Washington's alleged barriers on the movement of short-term services providers, or non-immigrant visas which will affect the country's IT sector — a major revenue churner and job creator.

It earlier raised the dispute on several measures concerning the US's fees and numerical commitments for H-1B visas in April last year. The two sides held consultations in Geneva last May but failed to reach an agreement.