Support for EU Plummeting Regardless of How Frenchmen Vote 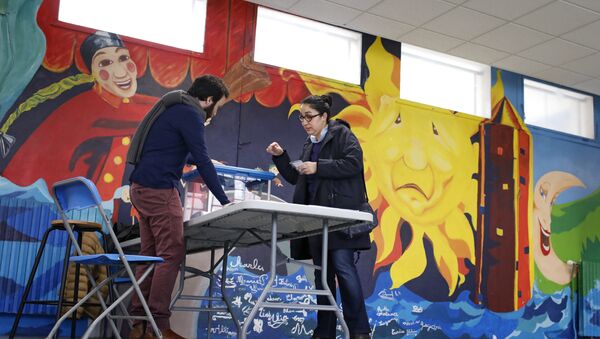 © AP Photo / Laurent Cipriani
Subscribe
International
India
Africa
Today, Europe's eyes are on the upcoming election in France, one of the EU's driving forces. Unfortunately for EU supporters, the outcome of the election is of but minor importance. All of the country's candidates for president, if elected are ready to transform the nature of European cooperation, effectively undermining popular support for the EU.

Norwegian Columnist Sacked for Backing French Presidential Candidate Le Pen
For Europe's left-leaning mainstream media, the election of right-wing candidate Marine Le Pen would be a 'calamity scenario,' that would indicate the country's willingness to abandon everything which has come to define the EU. The Front National leader believes that France should leave the EU, the Eurozone and the European Convention on Human Rights, as well as mend fences with Moscow and recognize Crimea's re-unification with Russia.

"The EU is indeed Europe's worst enemy, because it is basically a totalitarian structure. Today, the people of Europe are turning away from the EU because it is a perverse and basically totally undemocratic system. It forces us to dismantle our borders, thereby exposing ourselves to danger, while at the same time disturbing the economic balance in the countries," Marine Le Pen told the Swedish daily Dagens Nyheter.

Republican candidate François Fillon is the next worst option for the Brussels establishment. Unlike Le Pen, Fillon wants a strong Europe, but finds the European Commission too overbearing and would like to restrain its reins. What Fillon and Le Pen have in common though is that both advocate closer relations with Russia and believe that the EU should rescind its current sanctions. Fillon also believes that the European Court of Human Rights in Strasbourg has too much power, columnist Annika Ström Melin argued in an opinion piece in the Swedish daily Dagens Nyheter.

Exit Schengen, Fight Extremism: Le Pen Outlines Presidential Election Program
Fillon's main grudge is that the European Court of Human Rights condemns France for not recognizing children born to surrogate mothers in other countries. For Fillon, Strasbourg should stop meddling in "basic societal issues." Unless this is done, Fillon wants France to leave the European Convention on Human Rights.

Meanwhile, France's leading left-specter candidates are also critical of the EU and would like to see changes as well, albeit of a different nature.

Socialist Benoît Hamon demands that the debt of Greece and other financially troubled Eurozone countries be written off. Additionally, he ardently opposes the EU's free trade agreement with Canada (CETA), which, if enacted, will eliminate 98 percent of the tariffs. So does Left Front's Jean-Luc Mélenchon, founder of the Unsubmissive France movement, whose telltale name does not need further explanation. What makes Mélenchon less agreeable to the mainstream media's taste, though, is that he believes the EU is being too hostile towards Russia.

President Macron? French Election Blown Apart as Scandals Hit Fillon, Le Pen
Social liberal candidate Emmanuel Macron is the only one who differs himself by trying to strike a blow for the EU. According to Macron, a united Europe made France "bigger" and "stronger."

Meanwhile, popular support for the EU among Frenchmen is waning. In the latest poll, only 29 percent of French people agreed that the EU was something clearly positive, as opposed to 31 percent who perceived it as clearly negative, with the remaining 39 percent being neutral.

This is no surprising given France's historical relationship with the European Union. While France was indeed one of the founding nations of the pre-EU cooperation in the 1950s, its legendary president Charles de Gaulle openly despised what he called "the Bureaucratic Empire of Brussels." It turns out that transferring power to common EU bodies still remains a sensitive matter for the French.