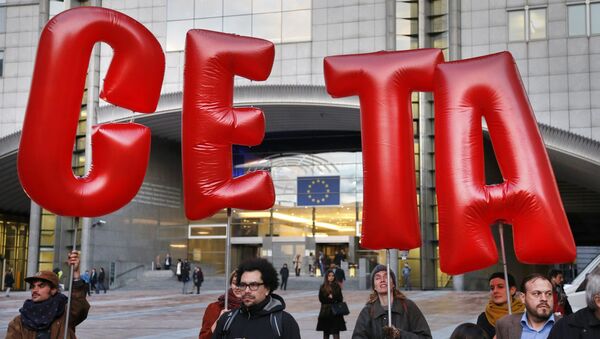 UK International Trade Minister Liam Fox has been accused of "burying" a parliamentary debate on the controversial CETA trade deal between the EU and Canada, with campaigners telling Sputnik the decision to hold the debate on the same day MPs discuss a Brexit bill shows a "disdain for democracy."

Despite initially promising a "full debate on the floor of the House" on the matter of the Comprehensive Economic and Trade Agreement (CETA), the examination of the proposed trade deal will instead be heard by the UK parliament's European Committee in a smaller conference room.

The timing of the committee meeting also coincides with the parliamentary debate over the bill to withdraw the UK from the European Union, which is expected to overwhelmingly attract the interest of lawmakers and the media.

​Guy Taylor, trade campaigner for the group Global Justice Now, told Sputnik it was "convenient" for the government not to hold a full debate on CETA.

"Liam Fox has had the chance to organize this debate on a number of occasions — he promised it previously in October. The thing we get out of this is that he's abdicating his responsibilities in trying to consult parliament like he promised, so I think it's a bit of disdain for democracy."

​"I think it is convenient for him not to have a debate because there are a lot of problems and concerns with CETA, and the more they get aired, the more they get expressed, the more opposition there is to the deal. So I think it's suiting him to have this little tiny debate with seven or eight MEPs tucked away in a committee room somewhere instead of having a full-blown debate on the floor of the House of Commons."

The criticism of the absence of a full debate on CETA comes amid fears over the impacts of the deal, with campaigners concerned the trade deal will lead to a reduction in environmental and health standards, the repealing of workers' rights and the shifting of power from governments to multinational corporations.

Among the most concerning elements of the deal is the inclusion of the Investor-State Dispute Settlement (ISDS) mechanism, also known as a corporate court, which Taylor says has led to increased opposition to similar trade deals such as TTIP and the TPP.

Good to meet @WarOnWant and @GlobalJusticeUK and to discuss concerns on #CETA including #ISDS courts. pic.twitter.com/hHol73SlQH

"I think probably the most controversial part of CETA and TTIP was the investor protection provisions, which meant that any corporation with investment in the partner country could sue a government if they took a decision which might affect their future profits," he told Sputnik.

"This has been around for a long time — the first instance of this measure was back in the 1950s — but we've seen a huge rise in the number of these cases that have actually been taken out. As a result, people are getting more and more aware of it — they're aware of the outrageous amounts of taxpayers' money granted to corporations for more dubious reasons and I think there's a lot of anger about that kind of thing at the moment. Basically we're seeing an awareness of that handover of influence and power to corporations — and an opposition to it."

CETA 'Won't Have an Easy Ride'

Despite criticism from some EU member states, and in particular the Belgian regional government of Wallonia, the EU and Canada agreed on and signed CETA in October, with officials in Brussels arguing the deal will stimulate more trade and provide European businesses with more opportunities to export into the Canadian market.

The agreement is now subject to a vote in the European Parliament on February 15, while every national and relevant regional parliament within the EU will have to ratify the deal if it is to come into full force.

Despite opposition against #CETA it has just been approved in the international trade committee in European Parliament #StopCETA pic.twitter.com/rY1JGnPzTq

​Given the grassroots opposition to the deal, Taylor believes there is a chance it may be vetoed by some national governments.

"I think there's a lot of scope for it to meet some quite difficult hurdles from this point on, assuming that it is voted through [on February 15]. I think what's been achieved has been a huge increase in awareness and opposition to CETA, and the pressure is on to get the MEPs to vote against it. I'm not sure how successful that'll be, but I think when it comes to national ratifications CETA is going to face a lot of opposition, and I don't think it's going to have a very easy ride at that point."