About 750 People With Alleged Links to Daesh Detained in Turkey 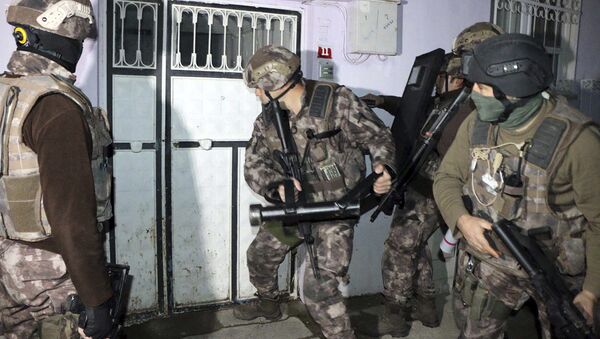 During a counter terror operation against Daesh, that was conducted on February 5 in 29 provinces of Turkey, 748 people were detained, according to the Turkish Interior Ministry.

ANKARA (Sputnik) — Some 750 people, suspected of links to the Islamic State (ISIL or Daesh) terrorist organization, were detained in a counter terror operation in 29 Turkish provinces on February 5, the Turkish Interior Ministry announced on Monday.

"During a counter terror operation against IS, that was conducted on February 5 in 29 provinces of the country, 748 people were detained. Besides, during a week in the course of other operations against the IS, 72 people were detained. Thus, a total number of detainees is 820 people. 12 terrorists were neutralized," the Ministry said in a statement.

Counter-Terrorists Win: Turkish Police Detain About 400 Suspected Daesh Members
Turkey has been fighting the Daesh, outlawed in Russia and many other countries, both inside the country and in Syria. In August last year, the Turkish Army launched a military Operation Euphrates Shield in Syria against the Daesh.

The terrorist group claims to have numerous cells in Turkey which the government tries to eliminate. Last week, the Turkish media reported about over 400 detainees as a result of a security operation against people linked to Daesh.