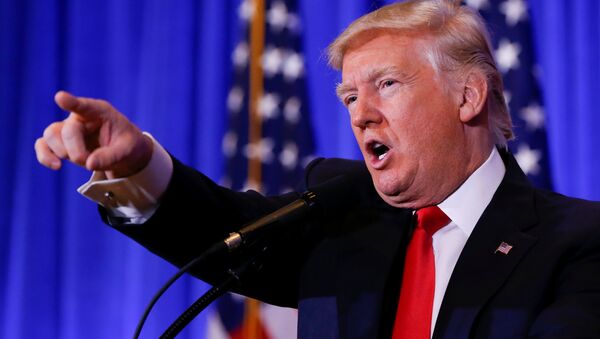 © REUTERS / Shannon Stapleton
Subscribe
International
India
Africa
US President Donald Trump slammed negative polls about his policies, such as those published by CNN, ABC and NBC, as fake news.

WASHINGTON (Sputnik) — Negative polls, particularly on the US border security and extreme vetting for immigrants, are fake news, US President Donald Trump stated on Monday.

I call my own shots, largely based on an accumulation of data, and everyone knows it. Some FAKE NEWS media, in order to marginalize, lies!

On Friday, a CBS News poll said 51 percent of the US citizens do not support Trump’s executive order on immigration, while 45 percent approve it.

In addition, a CNN poll found on Friday that 53 percent of Americans disapprove of the way Trump is handling his new job as president.

As Protests Rage, Trump Says Travel Bans 'Working Out Very Nicely'
On January 27, Donald Trump signed an executive order "Protecting The Nation From Foreign Terrorist Entry Into The United States," which suspends entry to the country for all nationals of Iran, Iraq, Libya, Somalia, Sudan, Syria and Yemen for 90 days, bars all refugees from entry for 120 days and blocks all Syrian refugees from entering the United States for a yet undetermined period of time.