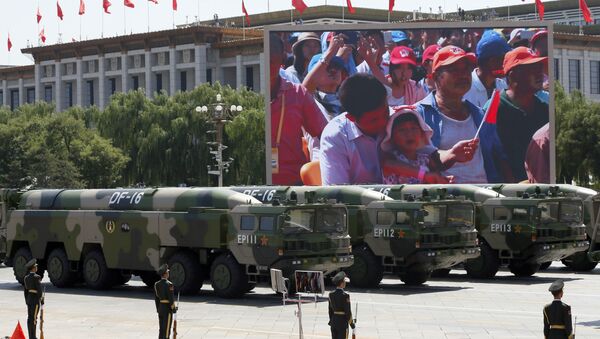 The Chinese People’s Liberation Army Rocket Force has begun practicing the deployment of medium-range Dongfeng (DF) missiles capable of reaching strategic US and Japanese bases near China, the latest iteration of Beijing’s war game-preparations for an armed conflict in the South and East China Seas.

While the Chinese Lunar New Year holiday celebrations carried on, Beijing focused on defense preparations. DF-16 missiles, first unveiled to the public in late 2015, were tested in the deep forest during missile-launch exercises in recent weeks, according to video footage of the war games published by the Chinese Ministry of National Defense.

The DF-16 missile touts a level of accuracy comparable to a cruise missile, Shi Hong, executive editor of Shipborne Weapons, told China Daily. To quantify this precision, the missiles can travel some 625 miles, carry up to three nuclear warheads at a combined weight of one ton, and strike within five feet of a programmed target.

The DF-16's range puts it in striking distance of the US military base on Okinawa, as well as the Japanese islands, Taiwan, and the Philippines, The Japan Times reports. The latest medium-range ballistic missiles developed by China work via two phases that allow the missiles to alter trajectory mid-flight, the news outlet added. This feature of the DF-16 makes it possible to maneuver around Taiwan’s missile defense systems, The Japan Times notes.

Beijing’s PLA Rocket Force could launch the DF-16 missiles from anywhere on the Chinese mainland, and perhaps even from China’s lone aircraft carrier Liaoning, given that the missiles are deployed from a mobile, 10-wheeled platform.

Recently, Beijing retaliated to US President Donald Trump’s communication with Taiwan by testing ten DF-21 missiles, which have a reported range of at least 900 miles. Chinese news agency Xinhua wrote that DF-21-class missiles can "destroy US Asia Pacific bases at any time." Military expert Rick Fisher told the Washington Free Beacon that "the PLA is banging some drums to provide background for military psychological warfare."

An article in the Diplomat noted that China does not need to be concerned about a "conventional American assault on the mainland" from amphibious landing by water, or from paratroopers, or Marine expeditionary forces. Beijing is susceptible, however, to Washington’s ability to control waters "outside of China’s 12-nautical mile maritime boundaries," the Diplomat noted.