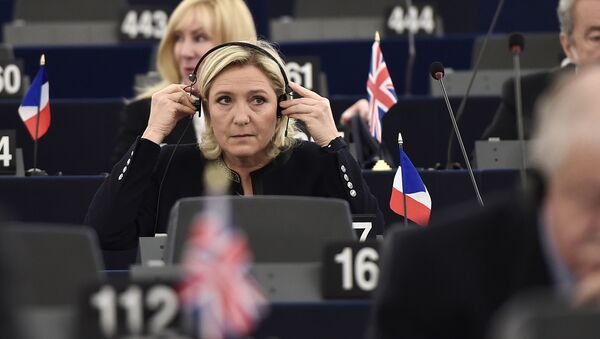 Leader of the far-right National Front party Marine Le Pen will remain presidential candidate of the party if the prosecution is launched against her, according to National Front Vice President Florian Philippot.

“Le Pen will remain presidential candidate if the prosecution is launched against her, “ Philippot told the radio station.

Last week, Le Pen refused to pay back to the European Parliament the money spent on the salary of her cabinet chief Catherine Griset. The European Union claims that Le Pen misused the money, because Griset was supposed to work in locations in Brussels or Strasbourg, while she mostly worked in the National Front headquarters in Paris.

Exit Schengen, Fight Extremism: Le Pen Outlines Presidential Election Program
The EU Parliament may launch a procedure against Le Pen, which will make it possible to deduct approximately a half of the amount from the next payments to the lawmaker until the expenditure is paid back.

Most recent polls indicate that the National Front leader is set to move on to the second round of the elections where she will face either The Republicans' Francois Fillon or independent Emmanuel Macron.

The first round of the French presidential election is scheduled for April 23, while the second one will take place on May 7.