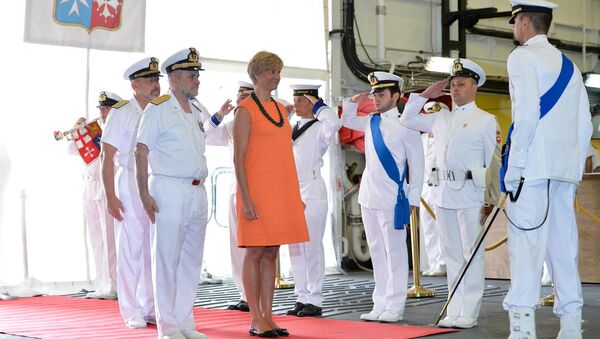 In an interview with Italian newspaper Il Messaggero, she said that close co-operation between Italy, France, Germany and Spain is particularly important, and envisaged the development of a "two-speed" Europe.

"European defense should be represented by a single bloc, both inside and outside NATO. There needs to be a Europe of 'two speeds' not only in the economic sense. We need a "Defense Schengen" strengthening cooperation between Italy, France, Germany and Spain," Pinotti said.

Federico Petroni, a Contributing Editor at Limes Magazine and co-founder of the website iMerica, told Radio Sputnik that the EU is seeking new defense initiatives since Brexit, which deprives the EU defense of a major player, and the election of Donald Trump.

Blow to Schengen as Austria Refuses to Re-Open German Border
In this context, "Pinotti's declarations are more diplomatic than strategic and substantial," and she is trying to put forward a possible paradigm for European defense going forward.

"In fact they are part of what another important Italian official, Miss Mogherini, is trying to achieve in the EU: a common initiative on defense, vis-à-vis a period of uncertainty due to the election of Trump, Brexit, the refugee crisis and so on," Petroni said.

The EU faces more pressing economic than defense threats, and the latter "are not as dangerous as they are portrayed."

Petroni said that the EU is unlikely to be able to agree on a "Defense Schengen," because the interests of European countries, for example France and Italy, are too divergent and "lack common interests."

"Take France, France historically needs to maintain a distinct set of military capabilities as its grand strategy requires Paris not to fill NATO's gap, but to be able to operate independently."

Italian Schoolgirl Jiu-Jitsu Champ Fights Off Three Migrant Muggers
"Italy, on the other hand, is trying to offset its military isolation, especially in the Mediterranean Sea, especially in Libya.'

"But, in Libya Italy is supporting the internationally recognized government of national accord, which is a rival of France's proxy, General Khalifa Haftar, who is a declared rival of this government."

"So, my view is that while it is possible that some initiative arises from these intentions, such a 'cooler' alliance would maintain very different strategic interests."