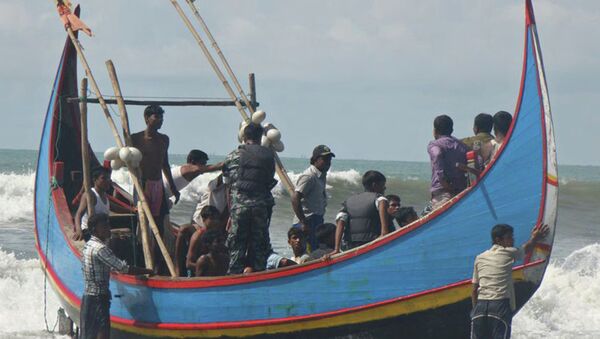 Hundreds of Rohingya people have been slaughtered and raped and up to 90,000 forced out of their homes by Myanmar’s military personnel, a UN report released February 3 claims.

UN Special Envoy: Myanmar Losing Credibility Over Denying Rohingya Abuse
According to the report, Myanmar's military has inflicted a four-month campaign of terror on the Rohingya, an ethnic minority from Rakhine state but now scattered across several countries after fleeing their homes. Military personnel reportedly came to villages in Rakhine and slaughtered people of all ages and sexes. Women and girls were gang-raped, and many homes were burned with people inside.

"The gravity and scale of these allegations begs the robust reaction of the international community," said Zeid Ra'ad al-Hussein, the United Nations high commissioner for human rights, whose office released the 50-page report.

Al-Hussein reportedly demanded that the government of Myanmar immediately stop what he called "counterinsurgency operations." The government of the country has repeatedly denied any organized persecution of Rohingya people. Calls for an international investigation have been resisted.

During an interview, Al-Hussein said he delivered his message to Daw Aung San Suu Kyi, state counsellor of Myanmar (roughly the same as prime minister in other countries, though Suu Kyi's civilian government does not have total control over the country's military). According to Al-Hussein, she was deeply moved by the report of violence and crimes conducted by the military.

Suu Kyi has been accused in the past of white-washing her country's treatment of its Muslim minority population.

Refugees Flee Myanmar as UN Special Rapporteur Blocked From Rohingya Villages
Despite the government's position, this time Myanmar authorities decided to respond to the reports with investigation; Suu Kyi has turned to the United Nations for help in obtaining more information. Presidential spokesman U Zaw Htay affirmed the government took the report very seriously, and a that special commission led by Vice President U Myint Swe would investigate.

According to Al-Hussein, an international investigation is also needed, as he has little faith in Myanmar's internal commission.

The United Nations believes the military started its crackdown on the Rohingya after insurgents attacked military posts on the border with Bangladesh, killing nine guards. The reports of violence include villages being destroyed with grenade launchers and even helicopters. Those who tried to flee the massacre were killed, the report says.

UN Human Rights Special Rapporteur Yanghee Lee visited Myanmar last month to explore claims of a military crackdown on the Rohingya. Lee was critical of the government's habit of denying any abuse of the Rohingya, and said she had been blocked from visiting several areas in Rakhine state where abuse was alleged to have taken place.