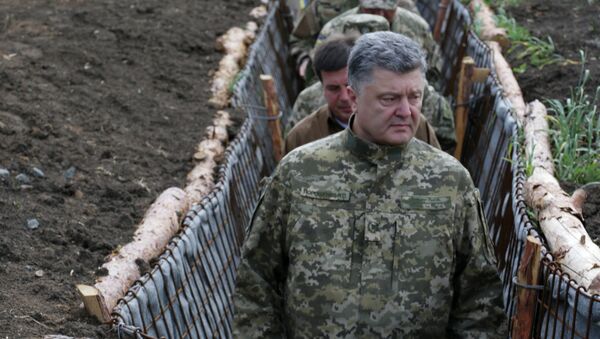 Commenting on the recent intensification of fighting in southeast of Ukraine and Poroshenko's explanations, Russian political analyst Vladimir Lepekhin has explained why the "room to manipulate the opinion of western politicians" is drastically shrinking for Poroshenko and why Ukraine has become a 'poisoned arrow for European unity.'

Kiev's Aim to Prevent Rapprochement Between US, Russia Appears Unachievable
On Thursday, the press center for what Kiev calls its 'anti-terrorist operation' in eastern Ukraine, issued a statement on the presence of its heavy military in the region. It said that "with regard to some media reports on moving tanks close to contact lines" the hardware represents "an operational reserve of Ukrainian troops" aimed at responding to potential attempts by rebels to break through into the areas held by Kiev.

However, the statement did not name any particular area, specifically Avdiivka.

On the same very day, representatives of the Organization for Security and Cooperation in Europe (OSCE) published a report saying that they had spotted Ukrainian tanks in Avdiivka (Avdeevka), which is a violation of the Minsk peace agreements, to which Kiev is a signatory.

The OSCE Special Monitoring Mission (SMM) noted "four tanks (T-64) parked behind a building in Avdiivka" which comes in "violation of the respective withdrawal lines." The OSCE also spotted "artillery pieces" on the territory controlled by the anti-government fighters, though it did not specify their type in the report.

Commenting on the reasons for the intensification of fighting in the southeast of Ukraine and the intentional shelling of civilians, political analyst Vladimir Lepekhin, Director of the EurAsEC (Eurasian Economic Community) Institute noted that "one could get engaged in demagoguery of 'yet another attack on Ukraine of Russian aggressor' for as long as he wants, it is an evident fact that the escalation of tensions in Donbass is by the initiative of Kiev which is admitted, among others, by the OSCE."

"There is hardly any politician in Europe who doubts that Ukraine has become a 'poisoned arrow for European unity," reads his article for RIA Novosti.

Kiev Makes Overtures to NATO to Keep Ukraine in the Spotlight
Meanwhile, Russia, he says, won't interfere into the internal matters of Ukraine, while the European bureaucrats, who in due time have taken the Ukrainian regime under their wing, won't admit their personal mistakes and won't take the responsibility for the crimes committed by Kiev.

However, sooner or later, they will be forced to acknowledge their mistakes, and then it will snowball as Trump admits Obama's mistakes in Ukraine or after a new chancellor of Germany similarly admits Merkel's mistakes, the analyst says.

"In any case, no matter how slowly Europe is going to reconsider its stance on Ukraine and Crimea, Kiev clearly understands that the room to manipulate the opinion of western politicians is drastically shrinking," Lepekhin says.

There are less and less subjects to talk about with Europe. Therefore the shelling of Donetsk and its suburbs by the Ukrainian armed forces is simply a reaction by Poroshenko to being explicitly ignored by the western politicians.

'Poroshenko Will Try to Hard Sell Ukrainian Crisis to Trump as a Key Problem'
The message Kiev is trying to send through its operations in Donbass and Avdeevka is therefore: "I will force you into negotiations with the president of Ukraine," the expert concluded.

"The appetite for revenge towards those who aren't ready to recognize the genius of Poroshenko and his merits to the democracy has apparently stripped the head of Ukraine of the ability to make rational decisions. The syndrome of a lame and not a very clever duck which imagined itself a wise eagle floating above the world, has turned out extremely contagious," the political analyst stated referring to President Obama's last days in office when he obviously refused to go, turning the process into a tragicomedy with loud shutting of numerous doors.