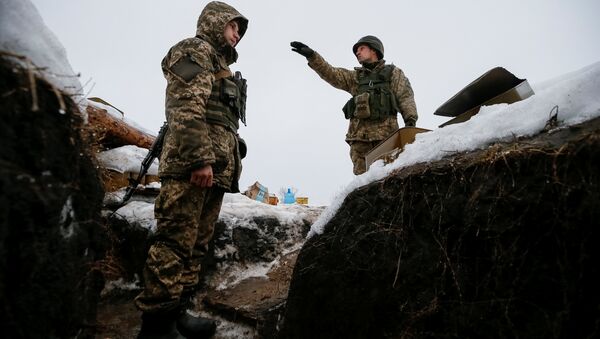 Amid intensification of clashes in Ukraine's southeast, Spanish demonstrators staged a protest in Madrid, demanding that the government cut relations with "Nazi regime" that had seized the power in Kiev.

'Poroshenko Will Try to Hard Sell Ukrainian Crisis to Trump as a Key Problem'
MOSCOW (Sputnik) — Several dozen people that gathered late on Sunday before the Spanish Foreign Ministry’s building in Madrid criticized the country’s government, demanding to end support for Ukrainian authorities and break off diplomatic relations with Kiev.

"We demand from the Spanish government to break off diplomatic relations with the government of Ukraine," Angeles Maestro, spokeswoman for the Forum Against Imperialist War and NATO told Sputnik.

The demonstration started because of the rapid escalation in the east of Ukraine. Spanish activists put the blame on the government of Ukraine, claiming that Kiev have "started a punitive operation against the civilian population of Donbas, violating the Minsk agreements that call to end the use of heavy weapons," Maestro explained.

"We blame the European Union for aiding the government created in a coup and supported by the people with Nazi views," she stated.

The activists, holding signs "Donbass Will Win!" and "Fascism Go Away From Donbass!", called for the Spanish government to "stop political and military support, both direct and indirect, through the EU and NATO, for the criminal government in Kiev".

"We as internationalists and anti-fascist want to express our support to Donbass. We remember that Madrid owes the Ukrainians that came to Spain to fight against the Francoism during the Civil War [1936-1939]," Maestro added.

The news comes as the Ukrainian forces resumed heavy shelling of the residential areas of Donetsk on Sunday, deploying additional troops closer to the borders of the self-proclaimed republics in the east of the country.

Ukrainian Lawmaker Calls Out Poroshenko for Blowing Pre-Election Peace Promises
The situation in the Donetsk region has escalated over the past few days, in particular near the town of Avdiivka, with clashes happening between Kiev forces and local militias. The fighting resulted in damaging critical civilian infrastructure, with power lines destroyed, water, electricity and heating supplies disrupted. Both conflicting parties have suffered casualties and accuse each other of initiating the violence.