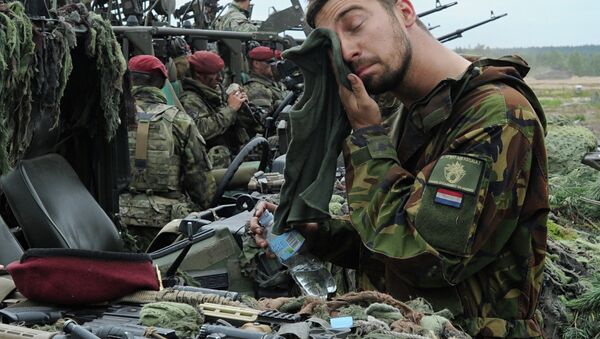 Angus Gallagher
All materials
Your rough guide to how the EU-NATO Axis became the last hope of the international liberal order at the expense of the western world.

NATO’s ships could stop the migrant flows in a heartbeat. Instead, the Alliance’s vessels are a vital link in bridging the Mediterranean, outdoing even the human traffickers. Ironically, maritime and human rights laws are used to justify positioning nearly a million young men of fighting age across the EU.

2. Failing to Stem the Tide of Terrorism:

Free movement across EU borders allows drugs, arms, human traffickers and ‘bad dudes’ to hide among the refugee influx. Instead of freedom and unity, European citizens face a permanent state of emergency that cruelly erodes their civil liberties while leaving them exposed to increased risk.

No Reason to Return to Arms Race Even Amid Possible Escalation in Europe
The EU-NATO Axis sees Brexit as a threat, Russia as a threat, and has now labeled President Trump an existential threat. While the bloc is able to flexibly co-opt almost any ideology from Conservative, Eurosocialist, Fascist, Trotskyite, Environmentalist, LGBT, into its expansionist agenda- it scorns sovereign democracy as both a menace to its internal integrity and the armed front against Russia.

The EU-NATO Axis has no use for genuine patriots who might question both its methods and their goals. Its primary need is cheap manpower to artificially maintain economic growth regardless of the social cost. Like it or not, in the key demographic of 18-30, mass immigration is de facto population replacement.

Even vulnerable societies in the Baltic are not to be spared, while Ukraine presents a vast opportunity for the resettlement of tens of millions of migrants from the Middle East.

'Miserable Failure of Authorities' in Berlin Result of 'Multicultural Policy'
This new eastern empire is to be ruled by a multicultural Germany and settled not by Germanic soldier-farmers as envisaged by Himmler- but instead by male migrants imported from the most blighted corners of the earth.

The EU-NATO Axis envisages a new ethnic compound to bind their eastern conquests composed of migrant men and Slav women. It’s a continuation of Germany’s drive to the east that began with the Teutonic Knights, that culminated in the horrors of the Third Reich, and which now seeks to finally conquer the Slav world for good. The EU-NATO Axis has weaponized population decline for geopolitical leverage.

Like Hitler’s plans to build an empire in the East and Napoleon’s dream of conquering the Orient, the EU-NATO Axis seeks to expand into both Ukraine and North Africa.

These expansionist goals are driven by the elites who want extractive resources, strategic depth, living space and absolute suzerainty over newly assimilated lands.

Of course, this is dressed up as the promotion of ‘civil society’ and ‘colored revolution’ to give a veneer to the looting of nations and the suppression of local resistance. It’s a policy that has knowingly promoted the worst kind of militancy from Kiev to Cairo.

The aims of the EU-NATO Axis are so radical, so likely to fuel extremism and so paranoid- that only a sophisticated propaganda infrastructure is ever likely to thwart potential resistance to its dual erosion of the nation state and western identity.

The MSM, including state broadcasters, are simply the globalist propaganda wings of Brussels where both the EU and NATO are headquartered.

Americans Stand up to Defend an Imaginary Country From Russia (VIDEO)
Far beyond anything it has ever done before in terms of victimizing western citizens, the EU-NATO Axis and its bipartisan allies in the United States are rallying to provoke conflict with Russia in a dogged effort to delegitimize President Trump.

As the contagion of civil disorder linked to modest immigration reform metastasizes across America, NATO troops are massing on Russia’s borders even as pro-EU militias under orders from Kiev and John McCain have begun shelling the Donbass in violation of the Minsk ceasefire agreements.

In a sign that Theresa May could well be double dealing against President Trump, a British Type 45 Destroyer, HMS Diamond, is moving towards Ukraine even as the fighting, in fulfillment of McCain’s New Year vow to confront Russia, worsens with each hour.

The EU-NATO Axis is no conspiracy theory: It’s hiding in plain sight. If left unchallenged, it will rip to shreds the very fabric of western civilization.