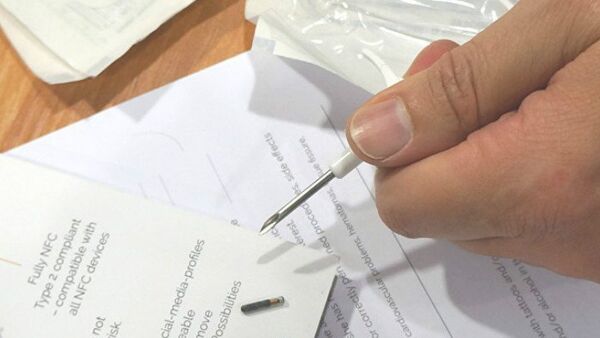 © Sputnik / Anton Polyakov
Subscribe
International
India
Africa
A group of workers from Belgium have joined an increasing number of people with microchips inserted in their hand.

Science & Tech
Liquid Biopsy? New Chip Detects Cancer in Tiny Drop of Blood
Employees at Newfusion, a Belgian digital marketing firm, have had microchips inserted under their skin which allow them to open and close doors and access the company's computers, Le Soir reported.

The microchips replace the badges which the workers used to wear, and also contain personal data about the user.

The chips cost 100 euros each and are the size of a grain of rice. They were inserted between the thumb and index finger of their hands.

While Newfusion is thought to be the first in Belgium to microchip their workers, other organizations are also considering chipping their employees.

In June last year it emerged that the US military had held meetings to discuss the possibility of  implanting soldiers with chips fitted with global positioning (GPS) technology in order to track their movement.

Science & Tech
Tomorrow People: Russian Engineer Implants Metro Chip Under His Skin
In October, it was reported that up to 20 people in the Czech Republic had been implanted with electronic chips that can be used for point-of-sale transactions, replacing non-contact bank cards.

Many religious groups, especially conservative Christians, are stalwartly opposed to the idea of being implanted with such chips. Revelations, the last book of the Bible, which deals with the end-times, warns of a "beast" who would force "all people, great and small, rich and poor, free and slave, to receive a mark on their right hands or on their foreheads, so that they could not buy or sell unless they had the mark."