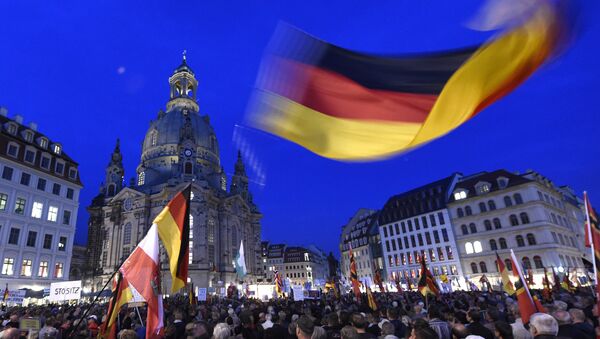 A German opinion poll has found that trust in the US has dropped to an all-time low, just one point higher than Berlin’s trust in Russia.

Germany and Turkey: 'There Seems to Be a Lack of Trust on Both Sides'
Following President Donald Trump’s ascension to the nation’s highest office, German popular trust dropped 37 points, to just 22 percent, down from 59 percent, according to a poll conducted days before the election.

The survey also found that only 21 percent of Germans trust Russia as an ally, and only 4 percent can say the same for Turkey.

When questioned about their opinion of Trump, Germans overwhelmingly disapproved.

Two-thirds of those polled believe that Trump's policies will damage the German economy, especially if the new US leadership introduces trade barriers. Only 25 percent support construction of a wall on the US border with Mexico, or the recent immigration order preventing residents of seven predominantly-Muslim countries from entering the United States.

Eighty percent of respondents said that the EU must increase efforts to oppose the US President. Similarly, 67 percent expressed fear that Trump would harm the German economy, while only 26 percent said they thought that his policies are a good thing.

Over Half of US Citizens Back President Trump's Entry Ban – Poll
A whopping 85 percent believe that Trump will damage the United States.

Meanwhile, as previously reported by Sputnik, the latest survey of the Russian sociological research organization Levada-Center, carried out among the Russian population, showed a very different picture: the number of Russian citizens having a positive attitude toward Trump increased, from 28 percent in November 2016, to 37 percent in December 2016.