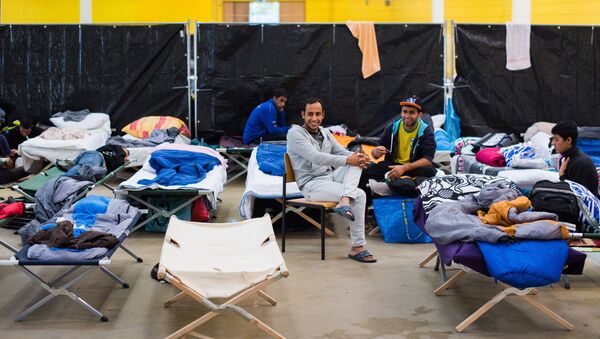 © AFP 2023 / Daniel Bockwoldt
Subscribe
International
India
Africa
Julia Kloeckner, the deputy head of Germany's Christian Democratic Union (CDU), stated that an upper limit of migrants is determined naturally by the capacities of the society and host communities and having "a number cast in stone" is not helpful for Germany.

Germany's Population Rose by 600,000 in 2016 Due to Migration, Reached 82.8Mln
MOSCOW (Sputnik) — The introduction of the upper limit on immigration is not necessary as the number of refugees is already declining and does not bring more safety than larger police presence, Julia Kloeckner, the deputy head of Germany's Christian Democratic Union (CDU), said on Saturday.

"The number of refugees is decreasing. The number of those eligible for deportation grows… The word 'cap' [on migration] does not bring more safety, but more police do," Kloeckner told Die Welt newspaper.

According to Kloeckner, an upper limit is determined naturally by the capacities of the society and host communities and having "a number cast in stone" is not helpful.

Kloeckner stated that new US President Donald Trump presented "a challenge," but added that German Chancellor and CDU leader Angela Merkel "led Germany and Europe through many other crises."

Angela Merkel's CDU Party in Migrant U-Turn to Counter Right-Wing AfD Threat
The CDU deputy head has recently been labeled by media as a potential successor to Merkel as the head of the party. Merkel, first elected as the chancellor in 2005, is currently planning to run for office for the fourth time in a row.

The chancellor's "open door" migration policy has been criticized by the far-right and even by the CDU sister party, the Christian Social Union in Bavaria (CSU), which leans toward restriction of the immigration.

The concerns about the influx of migrants and refugees were buoyed by the terrorist attack in Berlin, which occurred on December 19, 2016. The suspected perpetrator, 24-year-old Tunisian national Anis Amri, drove a truck into a crowd at a Christmas market in the center of the German capital, fled the scene, but was shot dead a few days later by police in Milan, Italy.

Germany has for several years been one of the top European destinations for thousands of refugees and immigrants. Some 280,000 refugees came to Germany in 2016, compared to 890,000 arrivals in the previous year, according to the German Interior Ministry. The majority of the asylum seekers are from Syria and Afghanistan.