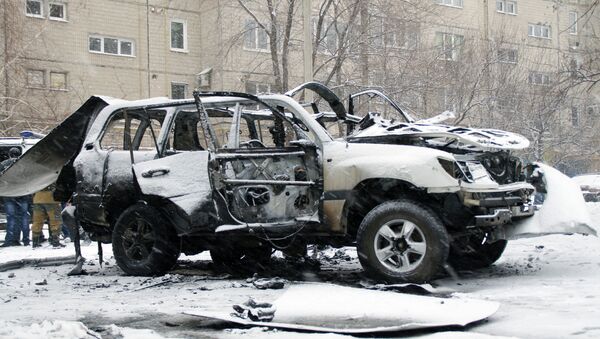 © Sputnik / Olesya Potapova
/
Go to the mediabank
Subscribe
International
India
Africa
Igor Plotnitsky, the head of the Lugansk People’s Republic (LPR) conveyed his condolences to the family and friends of the commander of the LPR People's Militia Office Col. Oleg Anashchenko, killed in a car explosion.

LUGANSK (Sputnik) — The blast occurred earlier in the day in the city of Lugansk in Donbass and is considered a terrorist attack by the local security forces.

"I offer my sincerest condolences to the family and friends of the deceased Col. Anashchenko. His courage, tenacity, valor have become the example of the officer's duty and honor to us," Plotnitsky said, as quoted by his press service.

The LPR head added that Anashchenko contributed greatly to the first achievements and victories of the self-proclaimed republic.

Putin Explains Reasons Behind Ukraine Crisis Aggravation
The Donbass conflict erupted in April 2014 as a local counter-reaction to the West-sponsored Maidan coup in Kiev that had toppled legitimate President Viktor Yanukovych in February. Residents of the Donetsk and Lugansk regions held independence referendums and proclaimed the People's Republics of Donetsk and Lugansk. Kiev has since been conducting a military operation, encountering stiff local resistance.

In 2016, prominent commanders Arseny Pavlov (also known as Motorola) and Alexei Mozgovoi, from the DPR and the LPR, respectively, were assassinated.