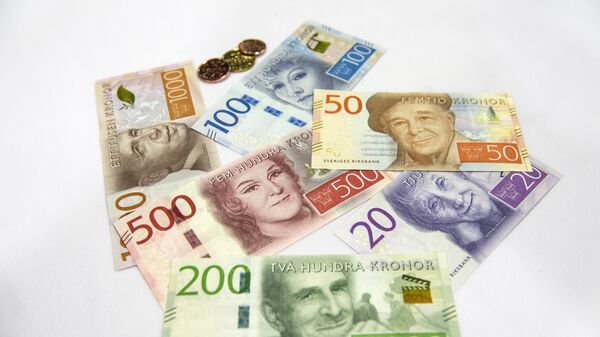 © AFP 2023 / TT NEWS AGENCY / PONTUS LUNDAHL
Subscribe
International
India
Africa
Once in a blue moon, banks go wrong in people's favor. On Wednesday, Swedbank unintendedly treated its customers with unlimited cash withdrawals due to a system error. Now, the bank is left tallying its losses and searching for the answer to what went wrong.

Swedish Pick-Up Artist Teaching Underage Migrants How to Spit Game
Wednesday evening saw hundreds of people lining up to Swedbank's ATMs across Sweden when word spread that Swedbank, a leading bank in Scandinavia and the Baltics, was treating its customers with free cash. For Swedbank, though, the system error that allowed customers to overdraw their accounts at ATMs meant a nationwide disaster. In Malmö and Gothenburg, police had to step in and guard ATMs to forcibly stop cash withdrawal, as Swedbank's cash machines were virtually stormed by excited clients.

"Although the reports we have received particularly apply to Malmö and Gothenburg, we believe that the error occurred throughout the country," Claes Warrén, Communications Officer at Swedbank, said, as quoted by Swedish tabloid Aftonbladet.

Swedbank's problems began early Wednesday when customers were unable to withdraw money using MasterCard, get access to internet banking or make online purchases. The bank tried to tackle the glitch, but the solution backfired even worse, as the clientele went from not being able to withdraw a penny to having unlimited access to cash.

"An error in one of our databases occurred, namely the system we use for card transactions. It took a little longer to fix than we had initially hoped for," Claes Warrén explained.

Going South: Swedish Pensioners Move to Portugal in Hot Tax-Dodging Scheme
Perhaps contrary to expectations, Swedbank resolutely ruled out the possibility a hacker attack or other intrusion by an external party.

"There has never been any question of a hacker attack, the whole thing was wholly our own fault," Claes Warrén said.

The bank would neither reveal how many withdrawals were made or how much money is to be paid back, suggesting it was a matter to be solved privately with its customers. Nevertheless, Swedbank has high hopes of getting the money back. All transactions get automatically registered in customers' accounts. Employing the Enforcement Authority to collect the money is also an option.

Swedbank is a Stockholm-based Nordic-Baltic group, which has 9.5 million retail customers, of which over four million are in Sweden.