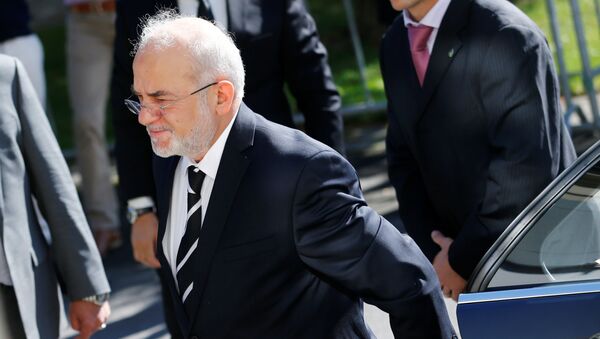 © REUTERS / Denis Balibouse
Subscribe
International
India
Africa
Baghdad was surprised with US President Donald Trump's decision to include Iraq in the list of seven countries, whose citizens are barred from entering the United States, Iraqi Foreign Minister Ibrahim Jaafari said, adding that measures in response will be taken against Washington.

MOSCOW (Sputnik) — Baghdad considers US President Donald Trump travel ban a "hasty and wrong" move made which disregards strategic cooperation between Iraq and the United States, Jaafari told RT in an interview Friday.

"We have told [the US Ambassador] that for us it was a strange position… For us, it was very strange that Iraq, as a country which became a victim of terrorism, has been classified in this way, in spite of such close cooperation between Iraq and the United States and the presence of US military advisers in Iraq, as well as the scope of our strategic cooperation between Iraq and the United States. All of these factors have been ignored, and I still do not see how one can justify that position. I believe that this decision has been made hastily and wrongly," Jaafari said.

Jaafari pointed out that Iraq would make a decision on its response to the restrictions imposed by the US government, adding, however, that Baghdad would not take the steps similar to the ones undertaken by Washington.

"Any case should be considered before making a decision and taking up a specific position on the issue. The decision is made not in a moment… For such state as the United States acting in such a manner would be better. We will act right in such a way and will not make reckless decisions. We will thoroughly consider the issue and will take right countermeasures without haste or emotions," Jaafari said.

Elon Musk to Object to Trump's Travel Ban in Business Advisory Council Meeting
On January 27, Trump signed an executive order "Protecting The Nation From Foreign Terrorist Entry Into The United States," which blocks the admission of all refugees to the United States for four months and bans arrivals of all nationals from Iran, Iraq, Libya, Somalia, Sudan, Syria and Yemen for three months. The entry for refugees from Syria was suspended for an undefined period.

The representatives of the states affected by Trump's order had also responded to the US move, for example the Iranian Foreign Ministry promised to take 'appropriate' measures against the ban and Tehran had already banned US athletes from participation in the 2017 Wrestling World Cup.

Trump’s travel ban, aiming to boost the country's security, has sparked controversy around the world and led to multiple protests in the United States.