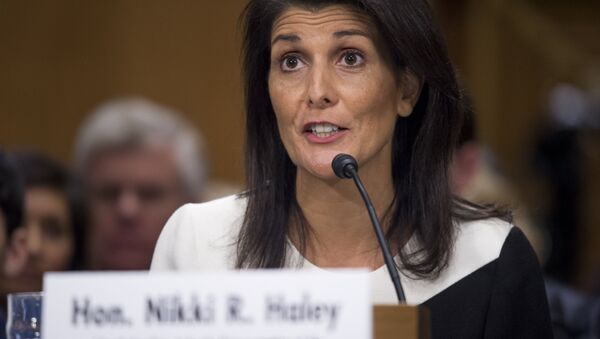 WASHINGTON (Sputnik) — Haley said on Thursday that Washington's sanctions related to the Russian peninsula in the Black Sea would "remain in place" despite a 2014 referendum in which the majority of Crimeans voted to secede from Ukraine and join Russia.

The Kremlin spokesman commented on the statement and said that Moscow was "never overly optimistic" about the United States' stance on sanctions, saying "we have talked about this from the beginning." He added that Moscow disagrees with such approach and will continue "to consistently and convincingly voice our position to all the members of the UN Security Council meetings."

"I think Ambassador Haley made it very clear of our concern with Russia’s occupation of Crimea," Spicer told reporters at a press briefing.

Russian Sovereignty Over Crimea 'Undisputed' - Kremlin
During her confirmation hearings in the Senate, Haley said that the US should be careful when dealing with Russia because Moscow cannot be trusted. She also commented the US sanctions against Russia and said that they should be maintained until there is a dramatic shift in Moscow's foreign policy.

Crimea, which has a predominately ethnically-Russian population, seceded from Ukraine to rejoin Russia in March 2014, following a referendum in which over 96 percent of the voters supported the move. The Ukrainian government, the US and the EU refused to recognize the legality of the vote and introduced sanctions against Russia.