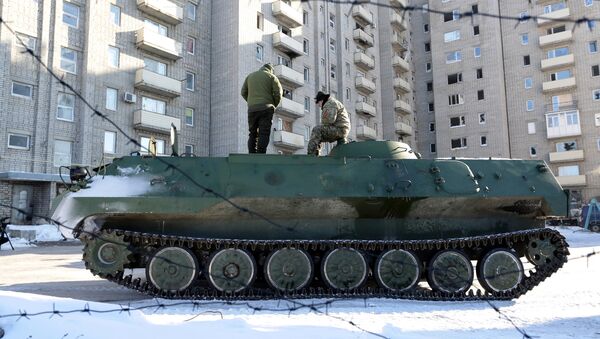 © AFP 2021 / Aleksey FILIPPOV
Subscribe
As the situation in eastern Ukraine escalates, photos have emerged on social networks showing tanks of the Ukrainian Armed Forces located among the residential buildings in the industrial town of Avdiivka.

Putin Explains Reasons Behind Ukraine Crisis Aggravation
The video was posted by BBC correspondent Tom Burridge on his Twitter account.

According to him, in Avdiivka he and his team came across Ukrainian soldiers and tanks that appeared to be battle ready and also heard noises that suggested that the ceasefire was not being observed.

Social network users noticed that in the video right behind the tanks there was a car and representatives of the OSCE mission.

Strangely enough these huge noisy armored vehicles which are clearly visible on the video were not as noticeable to some people.

Earlier in the day an official representative of the press center of the Ukrainian security Leonid Matyukhin told Sputnik that he denied the presence of the tanks, saying that there were no tanks in Avdiivka.

"I have spent the whole day in Avdiivka today, I have not seen any tanks, I saw one police armored reconnaissance vehicle," Matyukhin said, adding that it was necessary to check the scene of the filming.

Kremlin Calls Conflict Escalation in Ukraine’s Avdiivka 'Provocation'
The situation near the industrial town of Avdiivka and neighboring Yasynuvata has been tense for several days, with civilians being deprived of running water, central heating and electricity. The Ukrainian forces and Donbass militia have accused each other of being responsible for the escalation of fighting.

000000
Popular comments
Obviously he cannot see any tanks, they have such advanced camouflage. I see noting but snow in the video