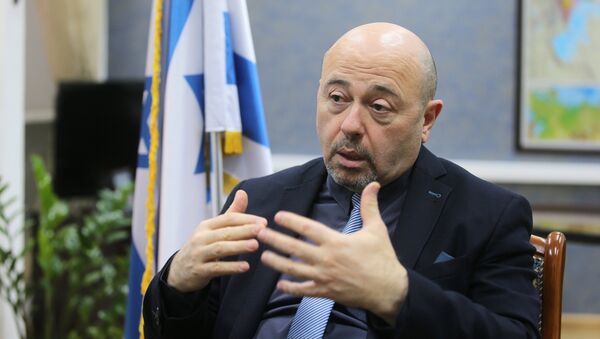 © Sputnik / Vitaliy Belousov
/
Go to the photo bank
Subscribe
Israel highly appreciates the peacekeeping role of Russia in the Syrian conflict, as well as its efforts to deliver humanitarian aid to civilians, Israeli Ambassador to Moscow Gary Koren said Thursday.

Russian Delegation Plans Feb. 6 Visit to Syria, Meeting With Assad Possible
MOSCOW (Sputnik) — Earlier in the day, Koren held a meeting with Konstantin Kosachev, the chair of the Foreign Affairs Committee of the Russian upper house of parliament, and said that the previous year had been successful for the Israeli-Russian relations.

"I think that this year will not be less intense, in a positive way, exactly due to the regional events in the Middle East. We highly appreciate Russia's peacekeeping efforts in Syria. This good cause is not only about a ceasefire, but also humanitarian aid to civilians," Koren said after the meeting.

According to Koren, Israel, on its part, also provides medical aid to Syrians, who enter the Israeli territory.