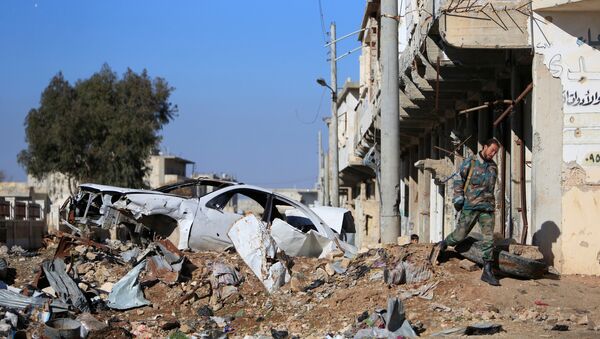 The peace talks which took place in Kazakhstan in late January have become the most effective platform designed to put an end and bring lasting peace to war-torn Syria, Oktay Aksoy, Turkey's former ambassador to Jordan, told Sputnik Turkey.

"We should acknowledge that the talks in Astana have become the most efficient negotiations held to resolve the Syrian crisis," he said. "They have significantly enhanced the likelihood of resolving the Syrian issue and have boosted hope in a diplomatic resolution of the conflict."

Water Source Destroyed by Terrorists in Damascus 'Resumes its Work' (VIDEO)
The Astana peace talks sponsored by Russia, Turkey and Iran were held to build on previous agreements reached between Damascus and the armed opposition. The deals, including the ceasefire plan, were unveiled by Russian President Vladimir Putin on December 29. Nearly a month later a delegation from Damascus and representatives of armed radical groups fighting to depose President Bashar al-Assad met in Astana for the first time since the war erupted in 2011.

A meeting which will cover the mechanism aimed at monitoring the truce is scheduled to take place in Astana on February 6.

Who's Trying to 'Kill' Syrian President Bashar Assad?
Earlier, Staffan de Mistura, a UN envoy for Syria, postponed the next round of the Geneva talks to "give a chance to this Astana initiative to actually implement itself." The negotiations in Switzerland were expected to take place in early February. They are now said to be slated for February 20.

Oktay Aksoy maintained that interrupting the Astana peace process would be "an extremely unsound step" since this process has successfully developed.

The diplomat also suggested that the format of the talks should be expanded to encompass other stakeholders involved in the Syrian War.

"It would be a positive step with regard to the chances of resolving the Syrian crisis if as many regional powers as possible joined the Astana peace process," he said. "One can assume that if such regional powers as Saudi Arabia, Egypt and Jordan join the Astana peace process at this stage, this would bring us closer to resolving the Syrian issue through diplomatic means. I think that Turkey would support such an initiative."

Oktay Aksoy further noted that Washington should also take a part in the Syrian peace process.

'Food for Thought': Here's What Opposition Says About Draft Syrian Constitution
"The Syrian crisis is an issue which the international community is trying to resolve at the UN level. From this point of view, it would be helpful if representatives of the United States took part in the meeting in Astana scheduled for February 6. They could greatly contribute to resolving the Syrian problem," he observed. "However, the US has been wrapped up in its domestic issues since the new administration has come to power. It would not be entirely realistic to expect Washington to actively engage in foreign policy at the moment."

Moscow has been open to this idea. In late December, Russian Foreign Minister Sergei Lavrov said that "key players who have an impact on developments in Syria" could be invited to join the peace process kick started by Russia, Turkey and Iran. He specifically mentioned Egypt, Saudi Arabia, Qatar, Iraq and Jordan. The diplomat also expressed hope that the Trump administration will join the process.