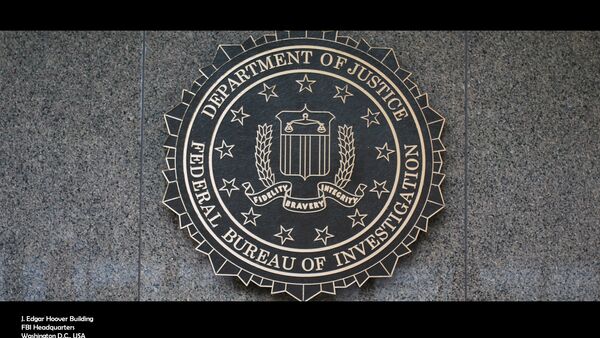 © Flickr / o.maloteau
Subscribe
The US Federal Bureau of Investigation (FBI) has extraordinary powers, some of them contradicting basic human rights and liberties, in particular, when it comes to the bureau’s dealing with informants, spying on anyone without particular reason and using a discriminative approach toward suspects, according to confidential FBI policy documents.

One of the key FBI ways to obtain information is to recruit and manage informants, or so-called confidential human sources. While in the 1980s the total number of informants amounted to some 6,000, after 9/11 their number skyrocketed to more than 15,000.

The leaked documents revealed that some of the FBI approaches were violating "civil liberties of those being targeted for recruitment."

For instance, FBI agents are advised to investigate those US citizens who were not suspected of committing crimes but who could be recruited as informants.

"Before approaching a potential informant, agents are encouraged to build a file on that person, using information obtained during an FBI assessment, including derogatory information and information gleaned from other informants," the document said.

FBI Guideline Shows Agents Advised to Spy on Likely Informants
The "source identification package" may include information from public and FBI databases, other informants or US agencies that could be used to force unwilling informants to cooperate with law enforcement agencies.

The agents may also recruit minors, clergy, lawyers and journalists as informants. The informants may operate in other countries, and the FBI is not obliged to notify the host countries on the issue. Meanwhile, an approval from the Justice Department is needed in case of recruiting senior leaders of any organization involved in illegal activities, while a permission from an FBI special agent-in-charge is required in case of recruiting minors.

Another obtained secret document titled "CHS Assessing," dated 2011, calls on FBI agents to create a psychological portrait of a potential informant, determining his motivations, mental stability and examining his hobbies, habits and interests.

"If information alone is not sufficient to induce someone to inform, the bureau may offer six-figure payments and even some of the value of any property forfeited as a result of the investigation," the Intercept cited the informant guidelines.

The recruitment may be done openly, when the agent identifies himself, in a covert approach, when agents may deny any link to intelligence agencies, and in a non-affiliated approach when an agent "does not volunteer" he or she is affiliated with any secret agency.

The Confidential Human Source Policy Guide also raises the issue of recruiting immigrants. According to the guideline, the FBI may assist immigrants and refugees lacking legal status to obtain it before making them informants, and it also may help Immigration and Customs Enforcement to deport informants "no longer of value." It means that the FBI is working in close coordination with immigration authorities.

Twitter Reveals Receiving 2 National Security Demands From FBI
The "Significant Benefit Parole Program" allows FBI agents to bring into the country "inadmissible or deportable" informants in case they can assist in investigations or provide important information. The "Deferred Action Program" allows an immigrant unable to leave the United States and return, to go to another country on FBI business and then be permitted to re-entry.

One of the classified documents, described as a "vision proposal" recommends the FBI to increase to 5 percent the number of special agents assigned exclusively to human intelligence work, while the number of agents charged both with recruitment and intelligence is not specified. The paper stresses that the bureaus would otherwise lose its "primacy" over domestic intelligence to the Department of Homeland Security, the Central Intelligence Agency or another agency.

The FBI actively operates in the Internet, not only recruiting informants and tracking terrorist groups’ activities but also detecting potential terrorists.

According to the "Counterterrorism Policy Guide," dated April 2015, the agents engaged in online counterterrorism activities should examine websites and networks that the bureau considers terrorists may use for recruitment activities and spread of propaganda.

Probes may, in particular, extend to the administrators of forums, people engaged in "the development of communications security practices" or "acting as ‘virtual couriers’ for terrorist organizations by passing online messages among members or leadership."

Trump Asks FBI Director Comey to Keep Position
The FBI’s online counterterrorism policy raises concerns among experts and activists that people making some bad jokes or comments may be labelled as terrorists and an investigation may be launched.

As regards online recruiting, the agents may use only publicly accessible websites and are not allowed to post their photos and reveal their interests or any personal information.

The leaked documents show that the FBI may spy on anyone, even if a person has no links to terrorists and is not marked to be recruited.

US To Reveal Number of Americans Caught In Surveillance Net By January 2017
The Domestic Investigations and Operations Guide (DIOG), obtained by the Intercept, allows agents to make so-called assessments, which means looking into tips or complaints not meeting the standard for opening an investigation. In case of deeper research, the agents may use data obtained from informants or physically survey the person.

The FBI may track a person’s phone, email, social network and other records, trace visa and passport records, check the databases of the Financial Crimes Enforcement Network in the Department of the Treasury and of local bureaus of Alcohol, Tobacco, Firearms and Explosives.

"Everyone should know that the FBI claims the authority to use extremely intrusive methods to investigate people without any factual basis to suspect that they have engaged in actual wrongdoing," Hina Shamsi, the director of the National Security Project at the American Civil Liberties Union (ACLU), was quoted as saying by the Intercept.

However, the guideline stresses that an assessment cannot be opened solely on the basis of a person’s race, religion or ethnicity.

The bureau is also empowered to demand information from companies that they are not obliged to disclose, namely sensitive information on email transactions, customers. Moreover, some of the requests are informal, which means illegal collection of data.

The Intercept highlights that discrimination based on race and religion is still spread in US law enforcement agencies and departments, referring to the obtained FBI Counterterrorism Policy Guide.

Although the FBI has not publicly addressed the issue of white supremacist infiltration of law enforcement, it was partly acknowledged by FBI Director James Comey in 2015.

FBI Director Comey Seen As Weak, Indecisive on Clinton Emails Probe
According to the Intercept, many cases of discrimination were simply silenced, while reports were withdrawn, adding that nobody screen prospective police and law enforcement officers for hate group affiliation.

The FBI may survey such officers without notifying the agencies’ authorities, unless an extreme case, though there is no data on what particular activities would warrant entry into the list.

According to the Counterterrorism Policy Guide, the FBI may mark a police officer on the watch list as a "silent hit," preventing queries to the National Crime Information Center.

As regards ordinary citizens, the bureau has been accused for a long period of time of having a discriminative approach toward suspects. In different periods of time, the secret services took a harsh approach toward particular activists or party advocates. Besides, FBI agents often violate rules of investigating regarding political and religious groups, doing it without proper authorization, with most recent examples including the Catholic Worker, Greenpeace, and People for the Ethical Treatment of Animals.

UK Journalists File Lawsuit Against Police Over Surveillance Claims
Apart from this, there are a number of other hidden loopholes allowing FBI agents to infiltrate groups.

The Intercept argues that the leaked documents show that the FBI has left its racial profiling practices almost unchanged.

The guidelines make clear that when an FBI agent is deciding whether or how to investigate someone, he or she may consider such factors as race, nationality or ethnicity as long as they coincide with other reasons for suspicion.

According to other secret documents, obtained by the Intercept, the FBI has also wide powers in regard to spying on journalists, for example, agents need an approval from only two internal officials to obtain a journalist’s phone records.

The bureau may obtain information about journalists’ calls without going to a judge or informing the relevant news organization, in particular, to "identify confidential news media sources," leaks and spies among reporters.