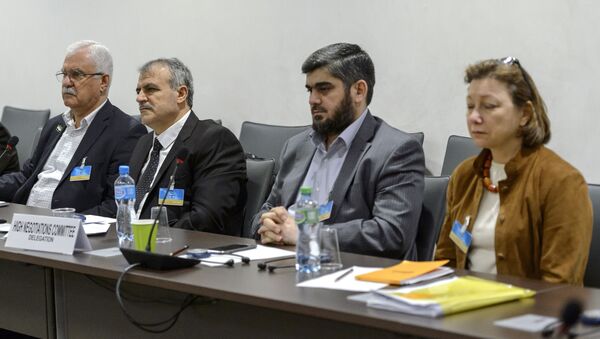 © AFP 2021 / MARTIAL TREZZINI / POOL
Subscribe
The Damascus Platform, which unites Syrian opposition forces and civil society members inside the country, believes that Syrian opposition groups will be unable to form a single delegation for the upcoming Geneva talks due to the groups' dispersed nature, the platform's spokesman Tarek Ahmad told Sputnik.

MOSCOW (Sputnik) — UN Special Envoy for Syria Staffan de Mistura said on Tuesday he would select the delegates for Geneva talks himself if a united Syrian opposition delegation is not formed by February 8.

"I don't think that Syrian opposition groups are capable of presenting a list of single delegation of opposition before the talks in Geneva as we lack unity among us," Ahmad said, pointing out that only under the pressure of the three guarantor countries or the United States the opposition forces could work out a united list.

The Damascus Platform may propose its own delegation of Syrian opposition forces and civil society members from inside the country for the upcoming Geneva reconciliation talks, Ahmad told Sputnik.

If Syrian Opposition Groups 'Echo What Assad Wants', They Are His Backers - HNC
"We are going to have a meeting of the Damascus Platform soon and may discuss an idea of proposing a list of our own delegation of civil society members and opposition forces from inside the country to Staffan de Mistura's office ahead of talks in Geneva," Ahmad said.

Ahmad added that the Damascus Platform called for an inclusive dialogue between all groups of the Syrian society. He stressed that a new round of settlement negotiations would be useless unless the civil society members were invited to participate.

"If we want to discuss Syrian future, the new Syrian constitution or reforms, the proposed format — opposition versus the Syrian government — is unlikely to bear fruits. We need a third group which will include civil society, independent representatives as well as tribes. All these groups are included in the Damascus platform," Ahmad pointed out.

Saudi-Backed Syrian Opposition Schools UN Envoy De Mistura Over 'Intervention'
Earlier in the day, a spokesman of the Syria's Tomorrow Movement told Sputnik that differing visions on the future of Syria among the opposition parties make it extremely difficult to form a unified front, adding that the group opposes the "official" opposition's activities, namely "lenience" toward al-Nusra Front terrorist group, "which is unacceptable."

Last week, members of various factions of the Syrian opposition met with Russian Foreign Minister Sergei Lavrov in Moscow and discussed among other issues the possibility to form a single delegation for Geneva.

Intra-Syrian peace talks in Geneva have been postponed until February 20 from the beginning of the months, upon the request of Staffan de Mistura to the Security Council.

000000
Popular comments
These scumbags will not be missed .