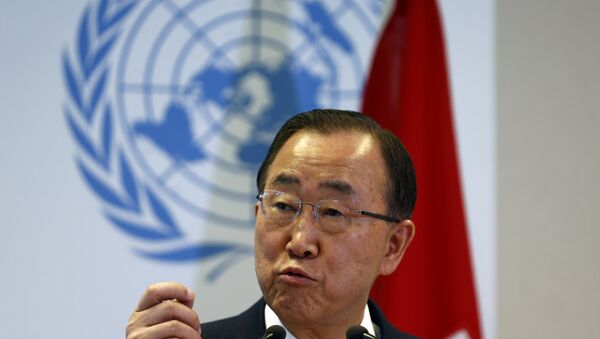 "I was very frustrated by parochial, selfish attitudes, and reached a conclusion that it is meaningless to move forward with them," Ban said at an impromptu news conference as quoted by the Yonhap news service.

Ban said he would "give up my pure aspiration to achieve a change in politics under my leadership."

Ban was until recently considered one of the main potential presidential candidates for the post after lawmakers impeached President Park Geun-hye in December 2016 over a corruption scandal with her close friend and "shadow adviser" Choi Soon-sil.

World
UN's Ban Ki-moon Congratulates Afghanistan’s New President, CEO on Inauguration
South Korea’s parties all expressed shock on Wednesday over unexpected withdrawal of the presidential bid by former UN Secretary-General Ban Ki-moon, who was considered one of the leaders among the potential candidates.

Ban, who was expected to run for president in this year’s presidential election, withdrew his presidential bid earlier in the day, saying that he was "very frustrated by parochial, selfish attitudes." The decision comes two days after a parliamentary expert group decided that Ban was eligible to take part in the election.

"We hope [Ban] will make contributions to the people based on his experience as the Secretary-General of the UN," spokesman of the ruling Saenuri Party Kim Sung-won said, as cited by the Yonhap news agency, calling Ban’s decision "shocking" and "regrettable."

"Although we are shocked, we respect his vision on political reform," Chang Je-won, a representative of the Bareun party, which split from the ruling party, was quoted as saying by the news agency.

The Democratic Party, which is the main opposition party in South Korea, welcomed Ban’s decision, saying they "respect" it, the media added.

Ban, who hinted at his presidential ambitions after his recent return to the country, was considered one of the main potential candidates after the impeachment of President Park Geun-hye in December 2016 over a corruption scandal involving her close friend Choi Soon-sil. The country’s Constitutional Court has until June to decide upon the validity of Park’s impeachment. On January 31, outgoing Court President Park Han-chul urged the court to decide on the issue "as soon as possible." If the impeachment is found valid, the presidential elections will be held within 60 days after the court’s ruling.