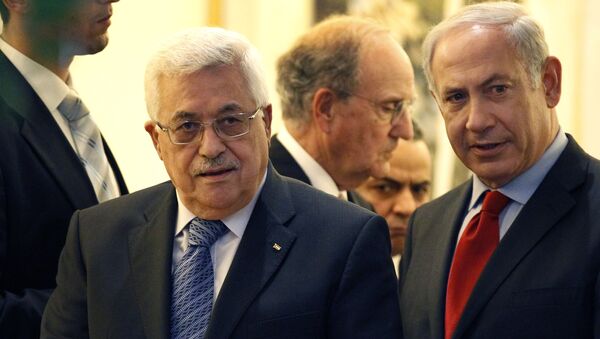 Moscow's invitation for the Arab and Israeli leaders to meet there is still in force, Russian Foreign Minsiter Sergey Lavrov said Wednesday.

Israel, Palestine Not 'Two Kids Playing in a Sandbox,' US Views 'Naive' - Expert
ABU DHABI (Sputnik) — Moscow's invitation for the Arab and Israeli leaders to meet there is still in force and has been accepted by the sides in principle, Russian Foreign Minsiter Sergey Lavrov said Wednesday.

"As you know, President [Vladimir] Putin offered Mahmoud Abbad ans Benjamin Netanyahu to meet in Moscow to start direct talks on how to unlock the peace process. This invitation remains in force," Lavrov said.

Speaking at a Russian-Arab Cooperation Forum in Abu Dhabi, Lavrov said "the parties have accepted it in principle."

In late summer 2016, Russia put forward the initiative for Abbas and Netanyahu to meet in Moscow to facilitate the revival of deadlocked Israeli-Palestinian peace talks.

US Sanctions on Russia Aimed at Challenging Trump on Palestine-Israel Settlement
In September, Netanyahu and Abbas announced their support for Russia’s effort to mediate talks on the resolution of the Israeli-Palestinian conflict, but laid responsibility on each other for the fact that the meeting had not been agreed yet.

In January, over 70 states and international organizations took part in the Paris conference for peace in the Middle East. Israel refused to take part in the conference, saying that it preferred to hold bilateral talks directly with the Palestinian side.