Pentagon: Houthi Attack on Saudi Ship Intended for US Seacraft 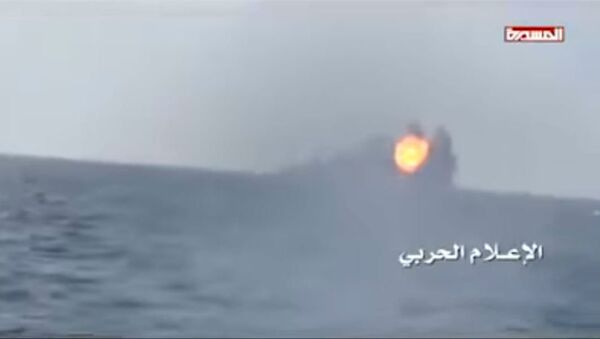 © Abbas Almutwkel/YouTube
Subscribe
International
India
Africa
A recent maritime suicide bombing off the coast of the Yemen may have been a “dress rehearsal” for a comparable attack on US destroyers patrolling waterways in the Middle East.

Defense analysts believe that not only might the attack have been a practice round for bigger fish, like the Arleigh Burke class guided missile destroyer USS Cole, but also that the attack was from a manned suicide vessel, as opposed to a missile or rocket strike. Multiple suicide ships may have caused the strike.

The Houthis are experimenting with tactics to reduce the power of the US naval fleet in the region, Pentagon analysts told Fox News, which corroborates with the chorus of a man promulgating "Allahu Akbar (God is great)! death to America, death to Israel, a curse on the Jews and victory for Islam!" in the following video.

A Saudi-led coalition of nine Middle East nations has been engaged in a conflict with the armed Houthi political opposition faction, which has been seeking to create an autonomous state since 2004. Washington has supported the Saudi-led coalition by supplying weapons and military equipment. In December 2016, the Department of Defense announced the sale of $3.5 billion worth of Chinook helicopters to Riyadh, in addition to some 600 Lockheed Martin PAC-3 missiles, worth some $5 billion.

The three biggest buyers of US weapons in 2015 were, in descending order, Qatar, Egypt, and Saudi Arabia, writes national security specialist Catherine Theohary. Each nation is fighting against the Iranian-backed Houthis. Qatar, Egypt, and Saudi Arabia accounted for 94.5 percent of the US’ $40 billion revenues from the global weapons market, according to Theohary’s data.

Many have called for the US to reduce its military presence in the Middle East, including isolationist rhetoric during campaign season from President Donald Trump.

Since the Persian Gulf crisis of 1990-1991, however, "this crisis…firmly established the United States as a guarantor of Gulf security," while also increasing the demand for American-made weapons. The armed mission in Kuwait effectively "created new demands by key purchasers such as Saudi Arabia, Kuwait, the United Arab Emirates, and other members of the Gulf Cooperation Council (GCC) for a variety of advanced weapons systems," the researcher said.

In 2015, Qatar procured more US-made weapons than any other country, according the Congressional Research Service. Qatar controls 13 percent of the world’s proven natural gas reserves, or approximately 25 trillion cubic meters, according to the CIA World Fact Book.