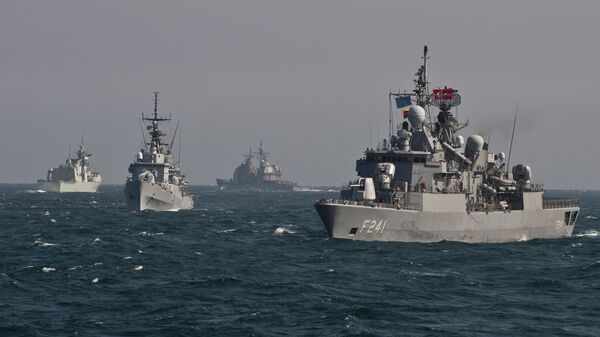 The Sea Shield 2017 maritime drills by seven NATO countries and Ukraine will start February 1 in the Black Sea. According to military expert Vladimir Kozin, this exercise is expected to send several signals at the same time.

According to the statement, the drills will involve over 2,800 personnel from Romania, Bulgaria, Greece, Turkey, the United States, Canada, Spain and Ukraine.

The Romanian Navy also said that during the drills "standard NATO procedures to battle air, submarine and surface threats will be performed."
The exercise will also involve 11 Romanian warships and four aircraft as well as six aircraft and five warships from other countries.

In addition, NATO Secretary General Jens Stoltenberg said Tuesday that defense minister of 28 NATO member countries will meet February 15-16 in Brussels to discuss a package of measures aimed at bolstering military presence in the Black Sea.

The Sea Shield 2017 drills will send several "messages" at the same time, Vladimir Kozin, a professor at the Academy of Military Sciences, told Sputnik.

"First of all, this exercise is targeted at Russia. There is also a message to all NATO allies that they have to observe military and naval solidarity. Moreover, this is a signal to Ukraine to prove that NATO can protect Kiev from the sea. All these goals are provocative," Kozin told Radio Sputnik.

According to the expert, the actual goal of NATO’s presence in the region is banal "sabre-rattling."

"What does NATO want there? It’s already been in the Mediterranean since the end of World War II. They regularly patrol the Black Sea on a rotational basis. First of all, their goal is to rattle the saber," Kozin said.

The expert pointed out that while NATO is ramping up its activities many in the West has repeatedly called for normalization with Russia.

"Those activities take place on land and sea, plus in the air. Air forces of 15 NATO members have been involved in the Baltic Aerial Patrol operation in Latvia, Lithuania and Estonia since March 2004. What is the goal? There will be no normalization and friendly relations in such an environment," the expert stressed.

Kozin also commented on the fact that two of the leading NATO countries, Germany and France, will not be involved in the Sea Shield 2017 drills.

'Third Wheel in the Chariot of History': NATO in Grips of Crisis
"Countries are selected for the exercise depending on its goals. The decision is made by the military command of the countries that organize the drills. The fact that German and France are not involved this time is not that important. They will be invited to take part in another exercise. So far, Paris and Berlin are committed to their activities within NATO," Kozin concluded.

Earlier in the day, Russian Defense Minister Sergei Shoigu said said Russia sees and controls everything that is taking place at the NATO drills in the Black Sea.

As you know, a large group has entered and continues entering the Black Sea for exercises. According to a decision of the General Staff and the head of the South Military District, all actions to control this group entering and its activities in the Black Sea have been taken. At present, we see and control everything that happens there," Shoigu said, adding that Russia is ready for challenges.