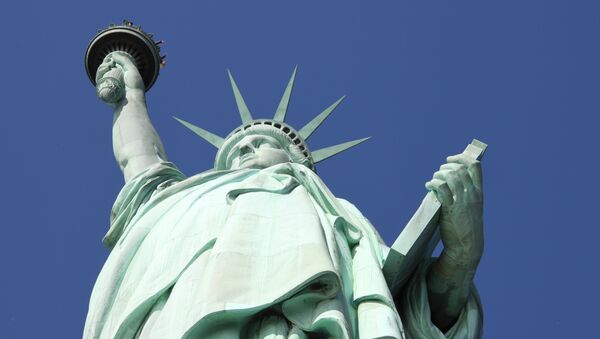 Alexander Mercouris
London-based lawyer
All materials
The major takeaway from the US Presidential election, and from the events which have shaped the first two weeks of Donald Trump’s Presidency - both his actions and the reactions of his opponents - is that America is tired.

It is not difficult to see why since the US has for decades been behaving in a way that was guaranteed eventually to exhaust it.

The US government has been focused to an extraordinary degree on foreign policy since the Second World War.

This is far from normal for any country, and is the factor which more than any other has shaped the present structure of the US economy and of US society, as the US leadership, overwhelmingly focused on its foreign policy, has increasingly neglected the needs of its home base, where problems have slowly accumulated.

US Air Force Pays $200Mln for Base Support, Security at Balad Airbase in Iraq
In contrast to its policy in the previous century and a half of its existence, the US has built up since the Second World War huge military forces at inordinate cost, many of them based overseas in a huge and intricate series of bases.

Whereas before the Second World War the US was the most civilian of societies, today millions of Americans have experience of service in the military, and American society and political discourse has to an extraordinary degree become militarised.

Alongside this vast military establishment the US has built up a huge intelligence gathering apparatus, on a scale unrivalled in history.  Whereas in 1929 US Secretary of State Henry Stimson shut down the State Department’s Cipher Bureau saying "gentlemen do not read each others' mail”, today the NSA aspires to read everyone’s mail everywhere.

Leaked Docs Reveal US Intelligence Agencies' Extraordinary Powers
Moreover unlike the intelligence communities of other countries and of previous times, since the Second World War the US intelligence community has been engaged in ‘direct action’ (coup making and other forms of interference) in the internal affairs of countries all over the world on a staggering scale, in a way which would have been unimaginable at any other time in history.

The US’ military and intelligence communities are supported by a vast complex of NGOs, think-tanks, ‘intellectuals’, publicists, and journalists, as well as a colossal scientific and industrial system, and a bloated diplomatic establishment, whose number has increased from less than 2,000 in 1940 to almost 16,000 today.

The financial and economic cost of all this is enormous, with military spending alone accounting for 16% of total US federal budget spending and a staggering 60% of discretionary spending, and with a disproportionate part of the US science and manufacturing base committed to military production, and therefore no long competing in the markets for civilian goods.

Military costs however form only a part of the picture.

Perestroika is Back: US Economy Falters as Trump Prepares to Rebuild America
In order to bind other countries to itself in a complex network of alliances, the US after the Second World War reversed its previous protectionist economic policies, opening up its economy to trade in goods from other countries.

It has also positioned itself at the centre of the world financial system, insisting in 1944 that its currency the dollar become the world’s reserve currency in which international trade in goods — especially energy products — takes place.

Since the 1970s the system has evolved further still, with the US seeking to compensate for what has become a structural deficit in traded goods brought about by its ‘open door’ economic policies by insisting that other countries deregulate their financial systems by abolishing capital controls, thereby resulting in huge compensating capital flows to the ‘safe haven’ of the US.

The result has been to ‘financialise’ the economy further, increasing debt creation and import penetration, and encouraging the export of US manufacturing to the US’s trading partners.

Meanwhile, as might have been predicted, the combination of a huge military establishment and a political leadership focused on foreign policy has resulted in an ever growing number of wars.

The attitude was perfectly captured by a famous quip of former US Secretary of State Madeleine Albright to Colin Powell, the Chairman of the Joints Chiefs of Staff: “What's the point of having this superb military that you're always talking about if we can't use it?”

The result is that whereas in the inter-war period the US was barely ever at war, since the Second World War, and especially since the 1990s, it has been at war almost continuously, with the time taken up by fighting peaking in the period of the Obama administration, when not a single day passed without the US military being in action somewhere.

Not surprisingly the cost of all this frenetic activity, and of the economic and military policies that go with it, has fallen increasingly heavily on the US population, which is called on to pay the taxes, service the debts, buy the foreign made goods — made increasingly at the expense of its own jobs —  and send its sons to fight the wars, that these policies are creating.

At the same time the material and psychological benefits of these policies are going disproportionately to an ever shrinking elite group concentrated in the federal capital and in certain coastal cities.

The US Empire Unmasked and Why It's Time to Speak Out
It is in fact an iron law of empire — even a quasi-empire such as that of the US — that beyond a certain point the benefits of empire go disproportionately to the elite few at the expense of the many, who must instead bear the empire’s ever growing cost.

The result is increasing social and economic inequality, and over time a rise in class tensions.  Eventually the cost of supporting the empire for the many becomes unbearable, and they rebel, demanding an ‘end to empire’ and a refocus on their needs at home.

It eventually happened in Britain in the 1940s, and the election victory of Donald Trump shows that it is starting to happen in the US now.

The retreat from empire caused great dismay within elite society in Britain, with the aftershocks reverberating still. Overall however the transition was well handled within British society, in part because victory in the Second World War lent a comforting afterglow to the process.

The great challenge for the US is to manage its retreat from empire with equal skill.

At present the omens do not look good, with US elite society in open rebellion against the retrenchment policies of the new President, whose own understanding of these processes is also open to doubt.

In 1902, at a time when Britain’s imperial mission was for the first time being seriously questioned, Joseph Chamberlain, Britain’s colonial secretary, lamented that Britain was a "weary Titan” staggering “under the too vast orb of his fate.”

The US’s future happiness depends on the US elite finally recognising that a “weary Titan” is what the US has become, and that what it needs is to become a more ‘normal’ — as opposed to an ‘exceptional’ — country, thereby finally finding for itself some rest.