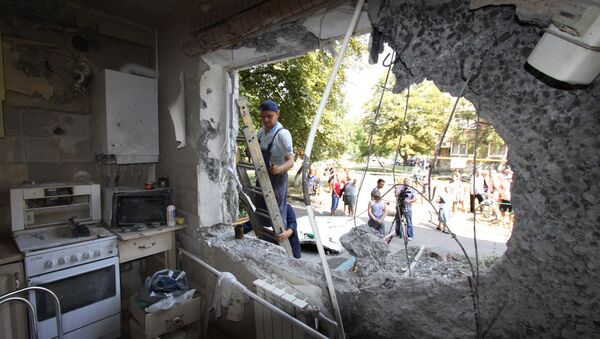 © Sputnik / Sergey Averin
/
Go to the photo bank
Subscribe
Ukrainian President Petro Poroshenko has cut short a working visit to Germany following an unprecedented escalation of the conflict in Donbass where Ukrainian forces have violated the fragile ceasefire almost 2,000 times over the past 24 hours alone.

Briefing reporters ahead of her meeting with Poroshenko, German Chancellor Angela Merkel said that the hard-won truce in eastern Ukraine was not holding.

Kiev's Aggression in Donbass Derails Minsk Deal - Kremlin
“We have learned again that the ceasefire regime simply does not exist, and that soldiers are dying again. The situation along the separation line is very alarming,” Merkel said.

Petro Poroshenko reiterated Ukraine’s adherence to the provisions of the Minsk accords and urged the Western countries to extend and toughen their sanctions against Russia if no progress is achieved in the implementation of the agreement to end the armed conflict in Donbass.

“They came here to study, not to be fired at”

He said that several houses were damaged or destroyed in Donetsk, Makeyevka and a number of other places, and that a local hospital, a daycare center, a steel plant and several other facilities had come under artillery and mortar fire.

Two civilians and three members of the local militia were killed and more than 500 local schoolchildren had to be evacuated.

“Hearing the sound of artillery shells exploding nearby we led the  children into a shelter. The kids were terrified. They came here to study, not to be fire at,” the school’s headmaster Lyudmila Kharchenko told RT.

When briefing reporters on Monday, Eduard Basurin blamed the latest escalation on “provocations” on Right Sector fighters who he said were forcing the Ukrainian military command to “adjust to their uncontrolled actions and suffer losses.”

“This is taking us back to the situation we had here in 2015. Ukraine is resorting to such provocations and artillery barrages to restart an all-out war,” Denis Pushilin, who represents the Donetsk People’s Republic at the trilateral peace talks in Minsk, told RT.

He urged the OSCE Special Monitoring Commission and the Joint Center for Control and Coordination (JCCC) to do whatever it takes to prevent any further violations of the Minsk accords and to maintain the ceasefire.

Discussing the reasons of this latest escalation of the conflict in Donbass, the director of the Ukrainian Institute of CIS Studies Denis Denisov said that with Donald Trump now in the White house and clear signs of Ukraine’s western partners losing faith in Kiev, the Ukrainian leaders were “losing their nerve.”

“They know full well that within the next couple of months they are going to lose their key support in the world and that Poroshenko and his team will no longer be able to keep telling lies about what is really going on in Donbass,” Denisov told RT.

He explained the latest spike in the number of Ukrainian bombardments in Donbass by Kiev’s desire to provoke an adequate response from the Donetsk and Lugansk People’s Republics and present this as an act of aggression against it.

“Kiev, and above all, members of the so-called ‘volunteer battalions’ realize that a month or two from now European and [US] representatives would no longer let them go on killing innocent  civilians in Donbass,” Denison noted.

Merkel Voices Concern Over Situation on Contact Line in Donbass
Kiev-based political analyst Mikhail Pogrebinsky said that while he was not expecting any dramatic change in the EU’s position on the conflict in Donbass, much depended on the position of new US President Donald Trump.

“McCain is provoking a full-scale war and for this he is getting medals from Poroshnko. What Trump wrote about McCain means that, instead of sending lethal weapons to Ukraine, he will be looking for ways to stabilize the situation and this is exactly what the ‘party of war’ in Kiev would hate to see,” Pogrebinsky told RT.