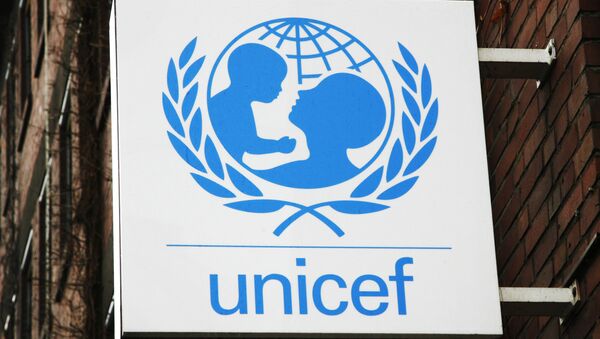 WASHINGTON (Sputnik) — UNICEF announced on Tuesday that it was seeking to raise $3.3 billion in emergency assistance for children living in conflict-torn countries or affected by other crises like natural disasters, climate change and disease.

“The largest single requirement is, of course, going to the people and families affected by the conflict in Syria, whether inside the country where we’ve got about over 14 million people affected or those living as refugees in countries surrounding Syria in places like Lebanon, Jordan and Turkey,” Ingram stated. “The next one in terms of its scale is Yemen where there’s been a very brutal war waged in one of the poorest countries in the region.”

Ingram said that the Fund is aiming to raise some one quarter of a billion dollars for children in Yemen.

Russia Delivers Over 3 Tonnes of Relief Aid to Aleppo Residents
“The next one after that is South Sudan, also another conflict which has been dragging on for a long time and where the needs of the civilian population, of children are particularly large,” the spokesman added. “Then, there’s Iraq, there’s Nigeria, the Democratic Republic of Congo and Ethiopia. These are really the top handful of appeals, national appeals which we’re targeting.”

Ingram explained that UNICEF hopes to raise money for both the essential daily needs of children, including shelter, immunization, and clean water, and for their longer terms needs like education.

“That’s recognizing really that unfortunately we don’t see any immediate chance that the conflicts in those countries will be resolved and that we must look to the longer-term needs of the children and of their societies and communities,” he added.

“Last year we were still very much impacted by the Ebola crisis which enlarged the number of countries that were requiring assistance.  This year, Ebola is not part of the appeal,” Ingram said. “The focus is very much on, I would say, countries in conflict, countries where we see not only the wars continuing, but we’ve seen the scale, and the type of conflict has changed.”

“We see very sadly, very worryingly the incidents where children and their homes, their schools, their playgrounds have come under attack, and sometimes under deliberate attack, where we see that the normal rules of war are not being applied and this is something that we’re extremely concerned about. And where it adds complications to the way in which we as a humanitarian organization go about our work in those countries,” Ingram added.

World Food Program Halves Food Rations for Displaced Iraqis as Funds Run Out
Ingram also noted that half of the funding requested in 2016 was for only war crises, in Iraq, South Sudan, Syria and the neighboring countries, and Yemen.

“Things haven’t changed radically I would say in that sense. Those conflicts still remain extremely important and the very center of the work that we do,” he stated.

Ingram concluded that the UNICEF is optimistic about reaching its $3.3 billion goal this year, stressing that it is grateful to its donors, key ones of which are the United States, the government of Germany, the government of the United Kingdom, the European Commission, Japan, Canada, Netherlands, Norway, and Sweden.

The UNICEF is paying special attention to malnutrition issues in its 2017 appeal for humanitarian aid with a particular focus on Yemen, Nigeria, and South Sudan, Ingram told Sputnik.

UNICEF announced on Tuesday that it was seeking to raise $3.3 billion in emergency assistance for 81 million people in 48 countries torn by conflict or affected by other crises like natural disasters, climate change and disease.

“Nutrition is a very important part of our appeal.  We’re looking to reach something like 3.1 million children, in almost every country of those 48 countries, but particularly focusing on some like Yemen and Nigeria and South Sudan,” Ingram said.

The spokesman stressed that UNICEF is increasingly concerned that in world conflicts children are unable to get a good diet, which is having a severe effect on their nutritional intake and has very long term consequences.

UN Providing Food Aid to 100,000 Iraqis Displaced by Mosul Operation
“Children who do not get the right foods, particularly very young children, if they’re not fed in the right way this impacts their development, their brain development, their ability to learn. It will have a lifelong impact on those children,” he explained.

“Very large civilian populations are living in very difficult circumstances, where young children are not getting the kind of food they need, so UNICEF provides food supplements to these countries to ensure that those young children can get the highly fortified food that helps them grow and learn in that critical phase of their development as young children,” Ingram added.

Ingram told Sputnik that Syria, Yemen and South Sudan are the three top targets among 48 countries of this year’s appeal, and stressed that the Fund is optimistic about reaching its $3.3 billion goal.