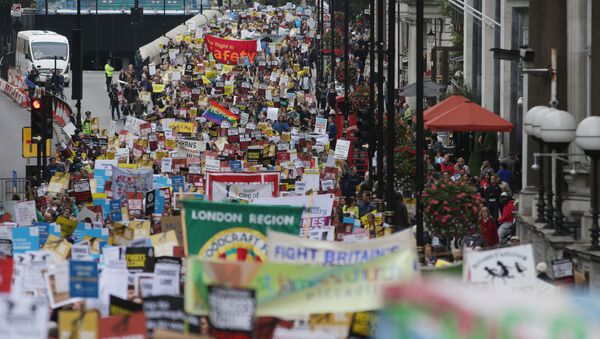 The accommodations for the asylum seekers in the United Kingdom do not meet basic criteria, the UK Parliament Home Affairs Committee revealed in a report Tuesday.

UK Supreme Court Ruling on Brexit Puts Scottish Independence Back on the Table
MOSCOW (Sputnik) – The accommodations for vulnerable and traumatized asylum seekers in the United Kingdom are a "disgrace" as in many cases they are substandard, unsanitary, and even unsafe, the UK Parliament Home Affairs Committee revealed in a report Tuesday.

"It is clear that in too many cases Providers are placing people in accommodation that is substandard, poorly maintained and, at times, unsafe. Some of this accommodation is a disgrace and it is shameful that some very vulnerable people have been placed in such conditions," the report said.

The parliament committee outlined how the current system for housing asylum seekers is ineffective, as many people are not receiving the proper support or resources to sustain themselves. Some of the biggest concerns for people were infestations of rodents and bedbugs, lack of cleanliness and furnishings, and various health-related issues which stem from the poor housing conditions, the report said.

UK Authorities Detain Migrant Trying to Cross English Channel Alone
The overall dispersal, inspection, and funding process for asylum accommodation are also subpar, the report continued. In many cases, local authorities refuse to house asylum seekers, which puts pressure on the system as a whole.

In response to their findings, the Home Affairs Committee has called upon the government for immediate action to ameliorate the housing standards of asylum seeks in the United Kingdom. Specifically, it calls for an improved inspection scheme, increased transparency in the complaints mechanism for asylum seekers, and more involvement of local authorities.

According to the committee, there are currently more asylum seekers housed than initially estimated. The UK Home Office initially predicted that some 20,000 to 25,000 asylum seekers would need to be housed at any one time. In reality, there were 38,441 total people housed as of February 2016. An additional 77,440 had their application in progress.