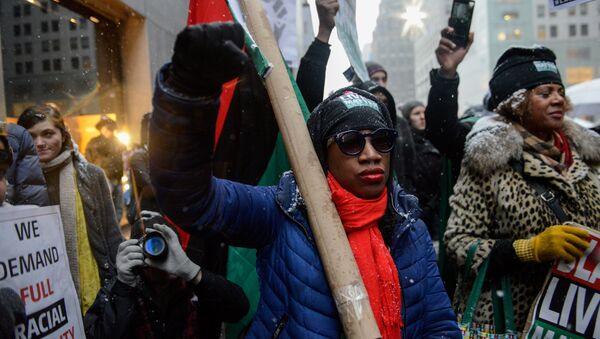 The President of the US Donald J. Trump vowed in June 2016 that he would "take care of the African Americans," however on January 27, Trump signed an executive order titled "Protecting the Nation From Foreign Terrorist Entry Into the United States," and some believe that it's only a matter of time before the US is eradicated of all minority groups.

In the lead up to the election, Trump met with 108 black leaders and preachers and appealed to them saying: "What the hell do you have to lose?"

However as the new leader of the free world introduces a US travel ban, ​black civil rights expert, Headley G. Squire, believes that the current racial rhetoric against minority group's shows that Trump's plan is to try and "make America white again" in order to maintain control.

Squire said that Donald Trump's pledge to increase jobs is just a smokescreen, and that minority and black people in the US can expect more police in their neighborhoods.

"[The] only jobs that will be available, will be on farms after the deportation of illegals and building the wall he promised," Squire told Sputnik.

From the US civil rights movement of the 1950s, right up to present day with Black Lives Matter (BLM), rights and freedoms have not come easy to African Americans. BLM released a statement shorty after Trump was elected president, stating that the president's time in office will only give permission for white nationalists to invoke more hatred towards minority groups.

"Donald Trump has promised more death, disenfranchisement and deportations. We believe him. The violence he will inflict in office, and the permission he gives for others to commit violence, is just beginning to emerge," the BLM statement read.

On January 28, the world witnessed countless protests in the US in response to the executive order, with so much divisive action already occurring, how can Trump build bridges and bring together a divided society? Squire believes that it is not the president's responsibility to do this; in fact this is the role of black people themselves.

Black Americans must realize they have the capability and opportunity to improve their lives. They need to unite, pool their resources and create new opportunities that will benefit them. I will quote Bob Marley: 'In the abundance of water the fool is thirsty.'

"The focus should not be on how others like Trump can build bridges. It should be how black people can shatter preconceived beliefs in order to improve their condition. The onus is on them to make the change — whatever the mind can conceive and believe the mind can achieve," Squire told Sputnik.

He also says that black people need to understand that they have the power to change their lives collectively through planned work, citing the book, Life at the Bottom: The Worldview That Makes the Underclass, written by Theodore Dalrymple, in which the authors says black people are free to enslave themselves.

"It is time black people start using their brains to solve their problems," Squire said.

However, with Trump's recent Muslim order and the fact that he has not appointed any minority people into his cabinet, some, including Squire, believe that the US president is only interested in self-preservation.

​"I do not think Trump has black people's interest in mind. Black Americans are not taught to create happy, prosperous and successful lives on earth," Squire told Sputnik.

Squire's view isn't shared by everyone though. According to others, black people in the US have much to gain from Donald Trump's presidency.

Kay Coles James, a trustee of The Heritage Foundation, who formerly served as director of the US Office of Personnel Management and as Virginia's Secretary of Health and Human Resources, believes that minority groups in the US have suffered the most over the years and that it is time for change.

In a recent article, James refers to the high unemployment and poverty rates among African-Americans, which are nearly twice the national average and the fact that 12 million blacks, including 4 million children, live in poverty in the United States.

"Trump appealed to the black community, who wanted to try a different approach, it won't be easy, of course. Some will disparage Trump's message and intent right out of the gate because they've been told they can only trust Democrats. Others will accuse Trump and his agenda of being 'racist' or 'bigoted' just because they know those words have an incendiary effect," Ms. James said in an article said.

Campaign group Black Americans for Trump have spoken out as to why they voted for him and will continue to support his policies. Many black Americans feel that Trump will bring prosperity to their communities, a pledge made by Barack Obama, but one that he never fulfilled.

After having a peaceful discussion with a communist this weekend. I can safely say "Thank God Trump Won🙌🏿" We need to audit the gov…

​"Donald Trump said, 'I want to bring jobs, let me bring it for you.' Democrats only care about the inner city when its election time. Trump told the truth and even though people don't want to hear the truth, its bitter, but we have to swallow it. I voted for Barack Obama when he said he would bring hope and change and "yes we can" but no we didn't. The jobs didn't come and the investments didn't come. Our borders our open and we are not safe and we need to stop thinking as black and white and purple, we need to start thinking as Americans. That's what Donald Trump is saying," said an African American voter in an online video.

This is going to be the most Prolific Presidental Term in modern history! @POTUS business swag is so refreshing, and reassures REAL CHANGE!

"Trumps organization has blacks, whites, Hispanics, Asians, different religions and creeds, he is the person who has created jobs and signed checks. All of that is important when we think of our next president and the American people. We need a champion who will provide the jobs," another voter added.

With US society facing a time of critical change, some African Americans believe that the needs of individual minority groups are no longer as important, as the desire to join forces as a human race.

However Donald Trump still has time to outline his proposed plan to improve job security and employment, which may place minority groups in a better position, which is why so many voted for him.