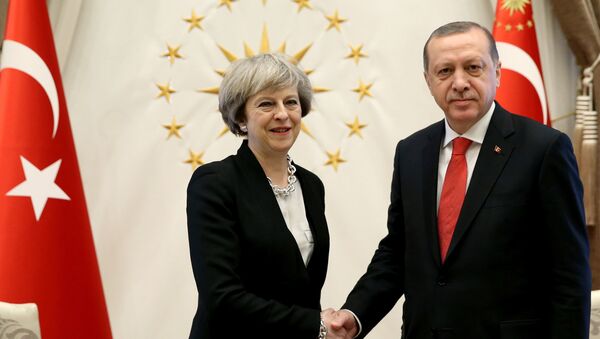 The UK government has once again been accused of ignoring human rights abuses in favor of arms trade after Britain signed a $US125 million deal to supply Turkey with new fighter jets, despite concerns over Ankara's recent crackdown on civil society.

UK Prime Minister Theresa May signed the deal during a state visit to Ankara over the weekend, where she held talks with Turkish President Recep Tayyip Erdogan.

The deal will see British defense manufacturer BAE Systems construct a TF-X fighter jet for the Turkish military, which May said was a sign of the UK's potential to thrive outside of the EU.

​"This agreement underlines once again that Britain is a great, global, trading nation and that we are open for business," she told reporters.

So May's first trade deal is to sell Arms to a questionable regime. Welcome to the UK's blind eye Brexit plan #may #brexit #turkey

Interesting how a core reason for #brexit was the fear of Turkey joining the EU and coming to the UK. Now PM is boasting about an arms deal!

However critics were quick to condemn the agreement, particularly given Turkey's crackdown on civil society in the wake of last year's failed coup, which has so far led to 125,000 people being either sacked or suspended from their jobs, 40,000 arrested and several media outlets closed.

​"It's a message of support to the Turkish government and its suppressive practices, which has seen thousands of people locked up, people sacked from their jobs and resulted in a crackdown on the country's media," Andrew Smith, spokesperson for the UK-based Campaign Against Arms Trade (CAAT), told Sputnik.

PM: The relationship between Turkey & the UK has always been important but it is arguably even more vital today. https://t.co/0XQ3vHHn5Q pic.twitter.com/go3bZi8Tqz

The criticism comes amid feverish debate about the UK's arms trade policy, with London accused of being complicit in breaches of international humanitarian law over its continued sale of arms to Saudi Arabia, which has been accused of bombing civilian sites during its military campaign in Yemen.

The concern has resulted in the government being subjected to a judicial review over its arms sales to Riyadh, to be heard in the UK High Court next week.

​Smith says the review, initiated by CAAT, could have profound impacts on the future of Britain's arms trade.

"That review itself, while specific to Saudi Arabia, could be instrumental in challenging government policy," he told Sputnik.

"We all hear about how Britain is meant to stand for human rights, for freedom, for democracy, and yet on the world stage the UK is consistently aligning itself with and arming some of the most brutal dictatorships in the world. We always hear about how rigorous and robust UK arms export controls supposedly are, but the evidence suggests the exact opposite is the case and nothing could be further from the truth."

​"If the UK cares for human rights and democracy of the Turkish people, then it would not be arming and selling £100 million worth of weapons to the regime that's suppressing them."