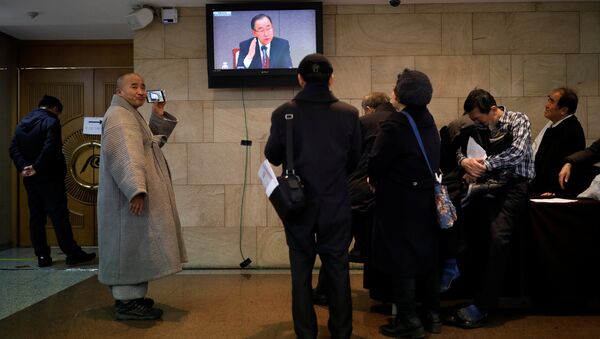 Ban Ki-Moon Supports South Korean Government Plans for THAAD Deployment
TOKYO (Sputnik) – According to the Yonhap news agency, the National Assembly Research Service (NARS) studied a resolution adopted by the UN General Assembly in 1946, which the opponents of the potential Ban's presidential bid used as the main argument, and have come to conclusion that nothing prevents Ban from running for the president.

The report prepared by NARS says that the resolution has non-obligatory nature and only recommends former UN secretary generals not to take up high governmental positions and does not ban them from doing it. However, the experts admitted that none of the former UN secretary generals had held top governmental positions after leaving the organization.

Ban is considered to be one of the main potential candidates for the position of South Korean president after the parliament impeached President Park Geun-hye on December 9, 2016 over the involvement in a corruption scandal with her close friend and "shadow adviser" Choi Soon-sil.