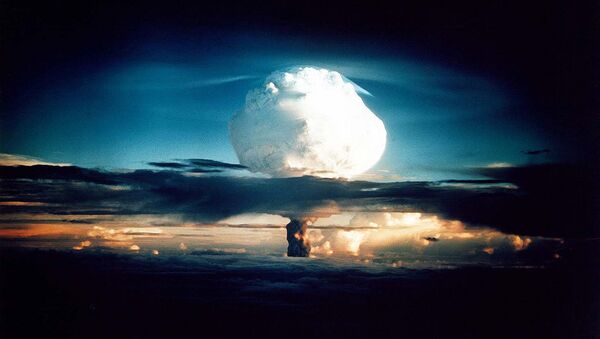 © Flickr / International Campaign to Abolish Nuclear Weapons
Subscribe
US intelligence agencies and the Pentagon's Strategic Command are working on a Congressional report to evaluate the probability of Russian and Chinese leaders surviving in the event of an American nuclear attack.

US Has 'No Obligation to Pay for European Security' Under Trump
Congress wants the report to contain thorough descriptions of "the location and description of above-ground and underground facilities important to the political and military leadership survivability, command and control, and continuity of government programs and activities of each respective country."

Putin, Trump 'Note Respect as Very Important Principle of Bilateral Relations'
On Thursday, The Washington Post reported that it had obtained a draft of Trump's 30-day assessment of the United States Armed Forces' readiness to engage Daesh (ISIL/ISIS). According to the newspaper, the document also asked Secretary of Defense James Mattis to examine how the United States military might fare in operations against un-named "near-peer competitors." This was "a term US officials typically use to mean China and Russia, but that language is not in the final version," the paper stressed.

'Great Rebuilding' of US Armed Forces Reflects 'Distrust in NATO'
Recalling Arizona Republican Senator John McCain's never-ending conflict with Trump on everything from Russian sanctions to Trump's cabinet picks, Bychkov noted that "here too, things certainly didn't happen without McCain's involvement. He is showing an enviable level of activity given his age. His battle cry of 'the Russians are coming!' has slowly and quietly morphed into 'Trump is here!'" Hence the effort to restrict Trump in potential efforts to make peace with Moscow.