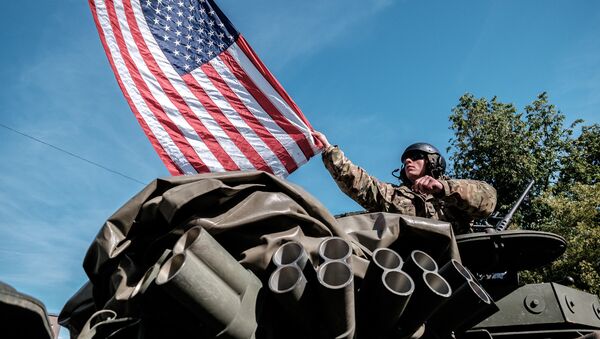 © Flickr / Kārlis Dambrāns
Subscribe
Despite his portrayal of NATO as "an obsolete" organization, US President Donald Trump is poised and ready to accept a more equitable distribution of military spending within the alliance, according to the German newspaper Die Welt.

Trump's Comments on NATO Might Suggest US 'Seeking Direct Control Over Alliance'
US President Donald Trump is ready and willing to alter NATO so that a more equitable distribution of military spending within the alliance can be achieved, political analyst Christoph B. Schiltz wrote in his article for the German newspaper Die Welt.

His commentary came after last week's telephone conversation between Trump and German Chancellor Angela Merkel, who focused on a wide range of issues, including those related to NATO.

In April 2014, then-presidential candidate Trump said that NATO is "obsolete and the United States is paying too much [to sustain it]."

In this vein, Schiltz specifically pointed to the fact that Trump and Merkel underscored the "fundamental importance" of NATO during their latest telephone talk.

"There is nothing surprising in it" given that despite Trump slamming NATO as obsolete, he at the same repeatedly emphasized the need to develop the alliance, according to Schiltz.

"In spite of everything, NATO will change significantly under Trump, who is ready to strive for an equitable distribution of spending on NATO. It is something that was demanded by many US Presidents before Trump," he said.

In this regard, he recalled that about 75 percent of defense spending in NATO is American taxpayer money.

"The new US Administration will rightly be up in arms against such a state of affairs," Schiltz said, adding that it is Germany that will bear the burden of Trump demands pertaining to NATO members' spending on the alliance.

"A NATO member state which spends only a little more than half of the designated 2 percent of GDP should not complain," he said.

Schiltz made it plain that 'the time for ceremonial speeches has passed," and that "this time Trump will prod Merkel to show results" as far as the solidarity of NATO members is concerned.

According to Schiltz, "significant differences between Berlin and Washington" can arise when the sides start to discuss the joint fight against terrorism and when Trump urges the allies to intensify efforts to combat Daesh (ISIL/ISIS).

"Probably, NATO along with the European military will have to conduct more operations in Syria, Iraq, Tunisia and Libya in the future, something that has successfully been opposed by Paris and Berlin in the past," he concluded.

'Third Wheel in the Chariot of History': NATO in Grips of Crisis
Meanwhile, the White House stated that President Donald Trump had reaffirmed the commitment of the United States to NATO in a phone talk with his French counterpart Francois Hollande and voiced his desire to enhance US-French security cooperation.

During the presidential race, Trump repeatedly said that Washington should decrease support for other NATO member states and protect only those members of the alliance which "fulfill their obligations" to the United States.

000000
Popular comments
Exactly how much money does the US taxpayer contribute to the illusion of world safety and protection? Sounds like a trick played on us to line the pockets of our own military industrial complex.
FightForTruth
30 January 2017, 15:35 GMT
000000
NATO was created in the 40's to supposedly protect us all from the terrible Soviet Union, which no longer even exists, and now Russia is the one stomping a mud hole into jihadi militias in the Middle East, yes ISIS extremists who are armed by the US. Sounds like the ultimate money making scam to me.
FightForTruth
30 January 2017, 15:40 GMT
000000
Newsfeed
0
New firstOld first
loader
LIVE
Заголовок открываемого материала
Access to the chat has been blocked for violating the rules . You will be able to participate again through:∞. If you do not agree with the blocking, please use the feedback form
The discussion is closed. You can participate in the discussion within 24 hours after the publication of the article.
To participate in the discussion
log in or register
loader
Chats
Заголовок открываемого материала
Worldwide
InternationalEnglishEnglishMundoEspañolSpanish
Europe
DeutschlandDeutschGermanFranceFrançaisFrenchΕλλάδαΕλληνικάGreekItaliaItalianoItalianČeská republikaČeštinaCzechPolskaPolskiPolishСрбиjаСрпскиSerbianLatvijaLatviešuLatvianLietuvaLietuviųLithuanianMoldovaMoldoveneascăMoldavianБеларусьБеларускiBelarusian
Transcaucasia
ԱրմենիաՀայերենArmenianАҧсныАҧсышәалаAbkhazХуссар ИрыстонИронауОssetianსაქართველოქართულიGeorgianAzərbaycanАzərbaycancaAzerbaijani
Middle East
Sputnik عربيArabicArabicTürkiyeTürkçeTurkishSputnik ایرانPersianPersianSputnik افغانستانDariDari
Central Asia
ҚазақстанҚазақ тіліKazakhКыргызстанКыргызчаKyrgyzOʻzbekistonЎзбекчаUzbekТоҷикистонТоҷикӣTajik
East & Southeast Asia
Việt NamTiếng ViệtVietnamese日本日本語Japanese中国中文Chinese
South America
BrasilPortuguêsPortuguese
NewsfeedBreaking
11:38 GMTRussian Deputy Prime Minister Not Ruling Out Repetition of Energy Crisis in Europe
11:24 GMTNorth Korean Website Slams 'Squid Game' as Showing 'Hell-Like Horror Where Only Money Matters'
11:07 GMTDeath Toll From Kandahar Mosque Bombing Rises to 63
11:02 GMTFrench Politician: US Has Moral and Legal Obligation to Unblock Afghan Assets & Let the Nation Be
10:59 GMT‘Killed Serving the People’: UK Media Shows Rare Display of Cross-Party Unity in Tribute to Dead MP
10:50 GMTIs Russia in Danger of Running Out of Gold Deposits?
09:08 GMTUS-Greek Bases Pact Signals Bid to Pressure Turkey, Dominate East Mediterranean
09:02 GMTAustrians Invited to Presidential Palace for COVID-19 Shots
09:00 GMTNASA's Lucy Mission Blasts Off to Examine Trojan Asteroids
09:00 GMTPremier League: Five Biggest Games of Matchweek Eight
08:55 GMTUK Police Ordered to Immediately Review MPs' Security Arrangements After Fatal David Amess Stabbing
08:30 GMTSeveral Dead and Dozens Injured: What Was Behind Thursday's Bloody Events in Lebanon?
07:33 GMTISS Crew Was Woken Up by Siren at Night
07:16 GMTAnother Day, Another Blunder: Psaki to ‘Choose Words More Carefully’ After Ethics Watchdog Complaint
07:12 GMTNetflix Fires Organiser of Trans Employee Walkout for Leaking Internal Documents, Reports Say
06:08 GMTFour Indian Paramilitary Personnel Injured in Blast at Raipur Railway Station
05:59 GMTBiden Admits He Will Have to 'Build Back Better' With Less, Is ‘Not Going to Get $3.5 Trillion’
05:45 GMT‘Sensational’ Remains Buried by Ancient Vesuvius Eruption Discovered at Herculaneum
04:34 GMTJapan Prime Minister Wants to Include Possible Attack on Enemy Bases in Security Strategy
04:31 GMTMagnitude 5.5 Earthquake Registered Near Southern Kuril Islands, Seismologists Report