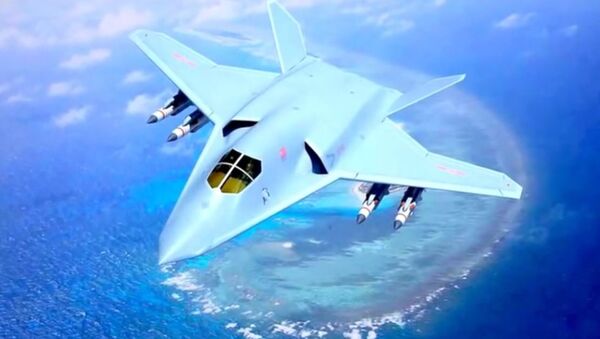 © Photo : Youtube/arronlee33
Subscribe
Amid heightening tensions surrounding US President Donald Trump’s protectionist stance, the possibility of a trade war and even physical combat between the world’s two largest economies has become a full-fledged "reality."

On the day that Donald Trump was sworn-in as the 45th President of the United States, Liu Guoshon, a Chinese Central Military Commission official, authored an op-ed pointing out that violence between China and America might not be so far into the future. "A war within the president’s term," and "war breaking out tonight," are not merely slogans, "but the reality," Liu said.

Ian Bremmer, a Stanford-trained political scientist and inventor of the global political risk index, commented that, "Chinese officials are preparing for the worst, and they expect to retaliate decisively in response to any US policies they perceive as against their interests." Bremmer added that Beijing's moves to increase DF-21 missile tests and initiate casual aircraft carrier missions near Taiwan is asserting itself as a warning to Trump, rather than as a show of force.

The South and East China Seas, and their accompanying territorial disputes, are just two areas where violence could erupt. A more macabre prospect would involve North Korea and a doomsday-scenario deployment of nuclear-equipped intercontinental ballistic missiles. Last week, a senior North Korean military official who defected asserted that if the Democratic People’s Republic of Korea (DPRK) head Kim Jong-Un sensed his dynasty was under threat, the dictator would “press the button” to launch a nuke aimed at, for instance, Los Angeles, California, the second-most populous metropolitan area in the US. A former deputy ambassador from Pyongyang to London, the defector asserted that mutually-assured destruction would not deter Kim.

Beijing has spent considerable time and financial resources toward increased militarization, following Trump’s election. The People’s Liberation Army is developing a stealthy, next-generation aircraft, the H-20. While officials say the aircraft has a long way to go, the cruise missiles and nuclear weapons for the aircraft "are all in place," Rear Admiral Yin Zhuo said.

On Trump’s first day as US president, the White House said that a “state-of-the-art” missile defense system would be a top priority for the administration, specifically, "Despite more than a decade of development and a bill of $40 billion," the Ground-based Midcourse Defense system “is simply unable to protect the US public,” a 2016 report from the Union of Concerned Scientists said.

In regards to a trade war between Beijing and Washington, the main risks may not only be economic. Economist Noah Smith writes that, without Trump’s protectionist policies, world trade, as a percentage of global GDP, peaked around 2004. Orthodox economic theory generally frowns upon protectionist policies for passing the costs onto consumers and thereby hurting trade. The equivocation, according to Smith, is that for the US and China large bilateral trade volumes are necessarily linked to mutual prosperity. Instead, lower trade does not reveal the full impact, Smith said. "It might be that large trade volumes make a country only a little better off in terms of real income, so that even a large reduction in trade flows hurts the economy only a little bit."

000000
Popular comments
Trump is not to wage wars but provocation by neocon-liberals is very likely during his term.

Walter Wolf
30 January 2017, 22:28 GMT2
000000
"Mutually assured destruction would not deter Kim" - what patent nonsense is that? There is the destruction of one city at most in the USA versus the destruction of all in NK. There is nothing mutual about it, and of course it would deter Kim to have himself, his family and his nation wiped out and then conquered. He would not actually pull the switch until he is invaded. It seem that the USA warmongers are ready to sacrifice a city or two for the sake of the survival of their ideology and dirty interests. Just like in 9-11. Unfortunately such action will very likely start WWIII. The nuclear genocide of the American people will be a fitting end to the nuclear genocide they perpetrated on the Japanese civilians at Hiroshima and Nagasaki. Since Russia and China combined far outweighs the USA in territory and population, if there are survivors to conquer the world, they will not be the Americans.