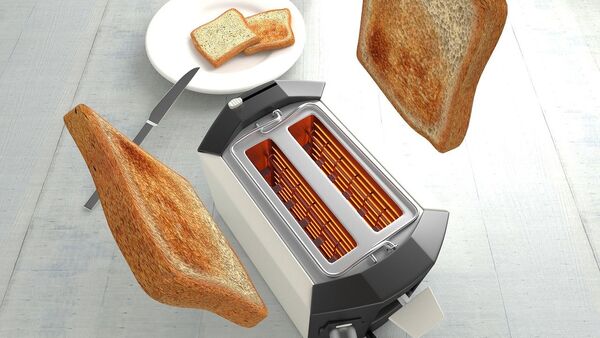 Scientific studies proving that certain foods, drinks, activities, inanimate objects can cause cancer are recurrent in mainstream media. Most recently, burnt toast and overcooked chips have been branded carcinogenic, but an expert on public risk understanding has told Sputnik such sensationalism could have a detrimental effect their own health.

The findings were publicized by the UK Food Standards Agency, as part of its Go for Gold campaign, which called on British citizens to aim for a golden yellow color when cooking starchy foods in order to minimize their exposure to a chemical called acrylamide.

No more burnt toast! 60 seconds on why burnt toast may cause cancer according to @foodgov latest campaign https://t.co/gUGeqxKTQ0

Acrylamide naturally forms in foods such as bread and potatoes when they are fried, baked or roasted. The International Agency for Research on Cancer, part of the World Health Organization, classifies acrylamide as a "probable human carcinogen" based on the findings of a 1994 study. The FSA bases its claims on these findings, stating acrylamide "has the potential to cause cancer in humans."

While the FSA's press blitz produced alarmist headlines and much anxiety on social media, others are more circumspect.

Sir David Spiegelhalter, Professor of the Public Understanding of Risk at Cambridge University, says that while acrylamide is used as an industrial sealant, and workers with very high exposures suffered serious neurotoxicity, "there is no good evidence of harm from humans consuming acrylamide in their diet."

"Cancer Research UK state there is no strong evidence linking acrylamide and cancer, but that's not for want of trying," Sir David told Sputnik.

"There isn’t a clear and consistent link between acrylamide and increased risk of cancer" https://t.co/5v1yr0p40E

"A 2015 report from the European Food Standards Agency lists 16 studies and 36 publications, but concludes acrilyamide was not associated with an increased risk of most common cancers, including respiratory tract, breast, prostate and bladder cancer. Remember, each study is testing an association with a long list of cancers, so using the standard criteria for statistical significance, we would expect 1 in 20 of these associations to be positive by chance alone.

"A standard response might be the over-used cliche that absence of evidence is not evidence of absence — but it can be considered evidence of something that is not very important. Reactions to the FSA's Go for Gold campaign may range from the extremes of encouraging obsessive concern in the worried, to irate editorials on yet another intrusion from the 'nanny state.' More worryingly, people may just consider this yet another scare story from scientists, and lead them to dismiss truly important warnings about, say, the harms from obesity."

In respect of obesity, Sir Davi added Cancer Research UK estimates obesity is behind around 18,000 cases of cancer each year in the UK, while in stark contrast, the FSA provide no estimate of the current harm caused by acrylamide, nor the benefit from any reduction due to people following its advice.

Help! My toaster is trying to kill me with #acrylamide #riskmanagement pic.twitter.com/wqgHODL4G6

He pointed out that the EFSA studies state 1.1 kilograms of acrylamide per day was considered a 'high' dose, but 97.5 percent of people consume less than this. Moreover, those consuming 'high' doses of acrylamide could consume 160 times as much and still only be at a level toxicologists think unlikely to cause increased tumours in mice.

"To be honest, I am not convinced it is appropriate to launch a public campaign on this basis," he concluded.

Did I just hear right on the Doctors that toast can cause cancer? 😳🙄😬

EFSA is itself aware of the limitations of extrapolating data from trials on mice. On its website, it notes evidence of acrylamide's impact on humans was "limited and inconclusive."

Moreover, the American Cancer Society (ACS) has highlighted that animals are given doses of acrylamide in their drinking water said to be around 1,000 to 10,000 times in excess of the levels people are exposed to in food.