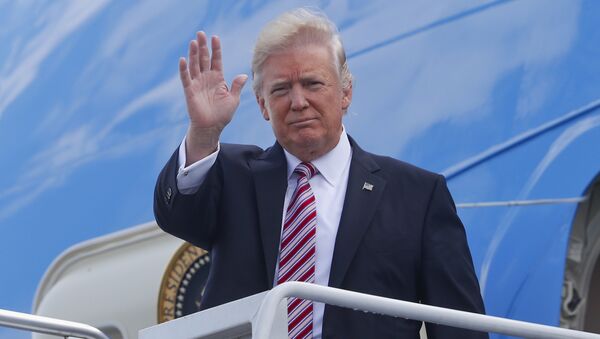 Donald Trump's visit is possible, but not an Official State Visit, as it would cause embarrassment to Her Majesty the Queen, the petition reads.

MOSCOW (Sputnik) — Over one million people have signed an online petition at the website of the UK Parliament demanding to prevent US President Donald Trump from paying an official visit to the United Kingdom, as of Monday.

"Donald Trump should be allowed to enter the UK in his capacity as head of the US Government, but he should not be invited to make an official State Visit because it would cause embarrassment to Her Majesty the Queen," the petition said.

The petition has already got the 100,000 signatures needed to be considered for a debate in the Parliament.

Over 1 million people have signed. @theresa_may we will not back down, cancel state visit and condemn the #Muslimban https://t.co/ySphksOliV

May Should Postpone Trump's UK Visit Over US Entry Ban - Labour Party Leader
On January 27, Donald Trump signed an executive order "Protecting The Nation From Foreign Terrorist Entry Into The United States," which suspends entry to the country for all nationals of Iran, Iraq, Libya, Somalia, Sudan, Syria and Yemen for 90 days, bars all refugees from entry for 120 days and blocks all Syrian refugees from entering the United States for a yet undetermined period of time.
Newsfeed
0
Access to the chat has been blocked for violating the rules . You will be able to participate again through:∞. If you do not agree with the blocking, please use the feedback form
The discussion is closed. You can participate in the discussion within 24 hours after the publication of the article.
To participate in the discussion
log in or register
loader
Chats
Заголовок открываемого материала