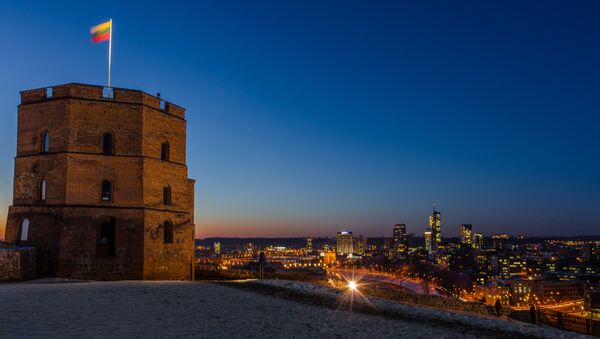 Lithuanian lauwmaker Linas Balsys has suggested that the European Union should think seriously about how to take the Russian exclave region of Kaliningrad away from Moscow's jurisdiction and 'return' it to Europe, saying that recent Russian actions have shown that the borders formed after the Second World War have lost their legal force.

Balsys made the proposal last week at a conference called 'The World in 2017: The View from Vilnius', Lithuanian news portal Baltnews.lt reported.

The lawmaker suggested that Russia lost its legal right to the Kaliningrad Region after Moscow's 'annexation' of Crimea, and now the status of the territory formerly known as East Prussia needs to be discussed at the international level.

"Time has run out for Kaliningrad," Balsys declared, speaking before conference delegates in the Lithuanian capital. "Kaliningrad was not given to Russia in perpetuity, either at the Potsdam Conference or at Helsinki. It was [only] said that the region would be put under Soviet administration until a final European peace agreement is signed," he suggested. Accordingly, Balsys added, European officials should discuss how to 'return' the former German territory to Europe.

Lithuania Probes if Local Kids' Trip to Russia Was 'Treason,' Finds No Proof
Balsys isn't the first Lithuanian politician to propose taking Kaliningrad away from Russia. Earlier, Laurynas Kasciunas, a lawmaker from the Homeland Union party, proposed something similar.

"I don't know what's going on in Lithuania, and why they have decided to speak on this subject, but there's probably a good reason for it: in springtime people suffer from a vitamin deficiency, which can account for these quirks," Onishchenko joked. "Don't worry about it – local psychiatrists will take care of it," he added. In all seriousness, the lawmaker suggested that Balsys may have been bored, and as a result is trying to find a way to draw attention to himself.

For his part, Vladimir Olenchenko, a senior fellow at the Moscow-based Institute of World Economy and International Relations' Center for European Studies, noted that Balsys' remarks should be taken seriously, first and foremost by Lithuanians themselves. The analyst told the Ekonomika Segodnya news portal that the borders of post-war Europe were formally established by the Helsinki Accords, which were signed in 1975. These borders have generally held, with a few exceptions, to this day, even after the USSR, Czechoslovakia and Yugoslavia broke up into their constituent republics in the early 1990s. "If we look at the Act of Lithuanian Independence of 1991, it includes five or six lines where Lithuania confirms its commitment to the Helsinki Accords, declaring them as the basis for their independence."

Therefore, Olenchenko warned that if Lithuanian politicians go around saying that the Helsinki agreements are dead, they could quickly run into territorial demands from their neighbors, including Poland, which controlled the region of Vilnius during the interwar period. Noting that he wasn't certain whether Balsys had personal ambitions in mind in making such remarks, or was representing some group interest, the analyst emphasized that "posing the question in this manner is extremely detrimental for Lithuania," since it "casts doubt on the country's territorial integrity."

Europeans Concerned US Troops' Arrival in Poland Could Fuel Revanchism in Warsaw
The city of Kaliningrad, formerly German Konigsberg, together with the surrounding territory of East Prussia, was signed over to Soviet jurisdiction by agreements that were made by the USSR and the Western Allies at the Potsdam Conference in July 1945. The final status of the region was agreed by the Allied Control Council in Germany through the agreement 'On the Liquidation of the Prussian State' on February 25, 1947. At that time, the territory was signed over to administration of the Russian Soviet Federative Socialist Republic (RSFSR), to which the Russian Federation became the legal successor in 1991.

Crimea joined Russia in March 2014 after local authorities organized a referendum asking the peninsula's residents if they wanted to break off from Ukraine and rejoin Russia following the Maidan coup in Kiev. Amid voter turnout of over 80%, over 96% of Crimea's residents voted to rejoin Russia.